The often unconscious and unintentional biases against women, including in academe, have been well documented in the autobiographical writings of authors such as Audre Lorde, Adrienne Rich, Patricia Williams, and bell hooks. But is the experience they document merely “subjective”?  Several recent social science research studies, using strictly controlled methodologies, suggest that these first-person accounts of discrimination are representative, not simply anecdotal.

The studies aggregated and summarized below offer important policy implications for the traditional ways that we count and quantify the processes leading to hiring, promotion, and tenure. These studies should be required reading of any administrators and faculty committees charged with decision-making. As much as possible, these studies supplement anecdotal accounts of gender discrimination with empirical evidence of bias.

We include here a round-up of several of these recent studies. There is also an open, public Google Doc to which we invite others to add other relevant studies and responsible, careful, fact-checked annotations.

Before listing the studies, we would like to offer a number of talking points about what they, in aggregate, suggest.

The Additional Component of Race, Racism, and Prejudice

The methodology of a number of these studies follows (and acknowledges and even pays citational homage to) the original, landmark study of racism and job discrimination, “Are Emily and Greg More Employable Than Lakisha and Jamal? A Field Experiment on Labor Market Discrimination,” by Marianne Bertrand and Sendhil Mullainathan (American Economic Review 94.4 (2004): 991-1013).  In this now-classic study, the exact same resumes were sent out, with only the name of the applicant changed.  The result:  “White names receive 50 percent more callbacks for interviews.”

Given the important findings in that earlier study of racism, one wishes these gender studies had also found a way to account for racial discrimination too. To see the parallel role of race and racial discrimination—and the particular discriminations that happen to women of color in the academy—we highly recommend the volume by Gabriella Gutiérrez y Muhs, Yolanda Flores Niemann, Carmen G. González, and Angela P. Harris, Presumed Incompetent: The Intersections of Race and Class for Women in Academia (Utah State University Press, 2012). The pieces in this book form a crucial intervention in the study of gender bias, focusing on the combined biases faced by women of color in academia (see annotation below).

In addition, we need to attend to research that analyzes the experiences of the non-normatively gendered within academia. We need conscious efforts to counteract unconscious and unintentional biases based on gender, race, ethnicity, class, sexuality, and (dis)ability.

The dismal stats about the low number of women aspiring to academic careers and why
“Why women leave academia and why universities should be worried”
The Guardian | May 24, 2012

This article cites the alarming conclusion of a study of PhD students in chemistry in the UK: only 12% of third year female PhD students want a career in academia. Author Curt Rice uses these statistics to call for institutional change: “Universities will not survive as research institutions unless university leadership realises that the working conditions they offer dramatically reduce the size of the pool from which they recruit. We will not survive because we have no reason to believe we are attracting the best and the brightest. When industry is the more attractive employer, our credibility as the home of long-term, cutting edge, high-risk, profoundly creative research, is diminished.”

This randomized, double-blind study found that both male and female faculty exhibited a bias against female undergraduate students, evaluating them as less competent, hireable, and qualified, and offering them less funding and mentorship.

Based on application materials, a candidate for a laboratory manager position was deemed more competent, qualified, and hireable if they had a male name. Identical application materials submitted with a female name were judged as less qualified applicants. In addition, the faculty hiring committee selected a higher starting salary and offered more mentorship to selected male applicants. Gender bias was found in both male and female faculty. The authors of the study acknowledge that bias is often implicit or unintentional, “stemming from repeated exposure to pervasive cultural stereotypes that portray women as less competent but simultaneously emphasize their warmth and likeability compared with men.” The authors cite research findings that those in disciplines that value objectivity are particularly susceptible to subtle gender biases because they are not on guard against them. Indeed, these negative biases against female undergraduates may affect their career decisions, and whether they see doctoral studies in the sciences as a viable option.

The authors call for a conscious intervention that addresses faculty gender biases: “The dearth of women within academic science reflects a significant wasted opportunity to benefit from the capabilities of our best potential scientists, whether male or female.”

The essays in Presumed Incompetent interpret and contextualize many studies that document the additional obstacles faced by women of color in academia including the presumption of incompetence (perpetuated by a lack of role models/leaders/mentors), covert and overt racism, conscious and unconscious bias, extra work, tokenism, having to battle stereotypes like the “mammy,” racist and sexist teaching evaluations, and the presumption of self-interest rather than expertise when teaching about oppression.

This article uses data from JSTOR to analyze the gender gap in scholarly publishing, exploring interpretations that range from gender bias to women’s greater time commitments to teaching and committee work.

“Although the percentage of female authors is still less than women’s overall representation within the full-time faculty ranks, the researchers found that the proportion has increased as more women have entered the professoriate. They also show that women cluster into certain subfields and are somewhat underrepresented in the prestigious position of first author. In the biological ­sciences, women are even more underrepresented as last author. The last name on a scientific article is typically that of the senior scholar, who is not necessarily responsible for doing most of the research or writing but who directs the lab where the experiment was based.”

In the sciences, the order in which authors’ names appear is crucial for tenure and promotion, though women are often less confident and assertive when negotiating where their name will appear. When women speak up for themselves, they are often perceived as mean, pushy, and unfeminine. Not only that, the article cites Dr. Shelley Correll, “When women negotiate in general, they are less likely to be successful. People don’t consider their requests as legitimate.”

While women are increasingly being listed as first author, those modest gains are not reflected in women being listed as last author, which, according to Dr. Jennifer Jacquet, “suggests that women in scientific fields are allowed to have ideas and do most of the work on a paper, but do not yet have the big grants and labs full of students and postdocs that would establish them in the prestigious last-author position.” 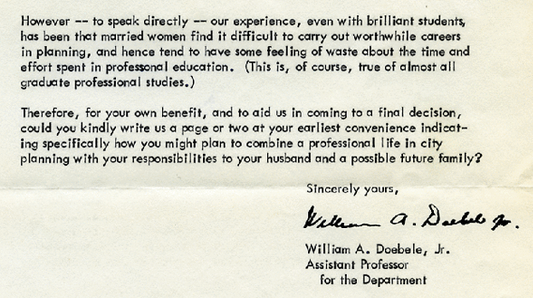 In this article, Phyllis Richman responds to a rejection letter she received from Harvard fifty-two years earlier. The original letter cites a professor’s concern that her education will be wasted when she goes on to have a family. Whereas Harvard decided that, should she eventually have a family, Richman would not be able to manage both, she counters that “the choice of how to balance family and graduate school should have been mine.”

This article still resonates today: a young female friend recently went on a medical school interview where she was asked if she planned on having a family and how she would balance those responsibilities in addition to medical school. When she told her male interviewer that she would “cross that bridge when I come to it” he responded, “you can’t do that!” She was eventually waitlisted.

This study found that male and female graduate students in communication “rated publications supposedly written by male scientists as higher quality than identical work identified with female authors.” Students gave higher ratings to identical abstracts submitted with male author names. In addition, female-authored abstracts on topics such as “parenting” and “body image” (rather than “politics”) were perceived as gender-appropriate and rated more highly.

The Matilda effect in science communication
The Matilda effect, coined in 1993 by Margaret W. Rossier, names the systematic denial of contributions by women in the sciences. Their work is often attributed to male colleagues.

Based on a study that asked graduate students in communications programs across the country to evaluate conference abstracts, the authors found that male-authored abstracts were associated with greater “scientific quality.” Male-authored abstracts that related to topics deemed “masculine” such as communication and political participation or democracy and journalism (as opposed to studies of gender, infancy, and parenting) were judged to have the greatest “scientific quality.” Graduate student evaluators were also most enthusiastic about potentially collaborating with the male authors of abstracts on “masculine” topics. Female-authored abstracts were evaluated more highly when they pertained to “feminine” rather than gender-neutral research topics. The authors demonstrate how even small amounts of gender bias can accumulate over the course of an academic career, affecting grant proposals, promotion and tenure reviews, and hiring decisions.

Bias for white men in mentorship and faculty responsiveness
“What Happens Before? A Field Experiment Exploring How Pay and Representation Differentially Shape Bias on the Pathway into Organizations”
Journal of Applied Psychology | forthcoming

This study found that when letters of interest were sent to professors in different disciplines (business, education, life sciences, humanities, social sciences, fine arts, etc.), the responsiveness of faculty varied according to race and gender. In all fields but the fine arts, letters signed with names that tend to be associated with white men (Brad Anderson as opposed to Keisha Thomas, Raj Singh, Mei Chen, or Juanita Martinez) were more likely to receive a response from a faculty member. Among business professors, where the disparities were the most extreme, responses to letters signed with names associated with white men increased 25 percentage points as compared to letters signed with names that signified as female or men from underrepresented minorities (87% compared to 62%).

This article describes an online tool recently developed by Professor Benjamin Schmidt, that allows users to analyze the teacher evaluations posted to RateMyProfessor.com based on the instructor’s gender. Users can type in keywords and see the frequency with which they are used to describe female instructors in comparison to male. As author Laura Bates notes, the results indicate that gender biases pervade teaching evaluations: men are more likely to be described as “brilliant,” “intelligent,” and “smart” while women are described as “mean,” “harsh,” “unfair,” “strict,” and “annoying.” Many of these adjectives suggest that female instructors are judged by how closely they measure up to cultural stereotypes of women as kind, friendly, caring, and nurturing mothers—parental criteria that do not get applied to men. However, she also notes that “there is less focus on female professors’ looks than one might anticipate.” These results should be taken seriously given the influence of teaching evaluations on academic hiring, promotion, and tenure decisions.