In line with our core mission to advance greater equity and innovation in higher education, the Futures Initiative has undertaken a long-term research project of creating the “CUNY Map of NYC,” a series of student-researched and designed maps that demonstrate key aspects of the City University of New York (CUNY) as a consortium of diverse higher education institutions and, in particular, that document CUNY’s relationship to and impact upon New York City.  The first of these maps is “The CUNY Sociodemographics Map of NYC,” a sociodemographic analysis of the communities closest to CUNY’s campuses.  The twofold purpose is, first, to see the characteristics of people who are in walkable distance (defined as one mile from campus) and, second, to compare community characteristics with college population characteristics, as based on enrollment data from the CUNY Office for Institutional Research and Assessment.

Using data from the United States Census Bureau’s American Community Survey, we conducted a proximity buffer analysis in ArcGIS and selected community characteristics based on census tracts that fell within one mile from each CUNY campus. Once we had selected the nearest census tracts for each campus, we aggregated the sociodemographic variables we selected from the census data (race/ethnicity percentages) for each buffer zone. We then tabulated the aggregate numbers for comparison alongside CUNY enrollment data on race/ethnicity. 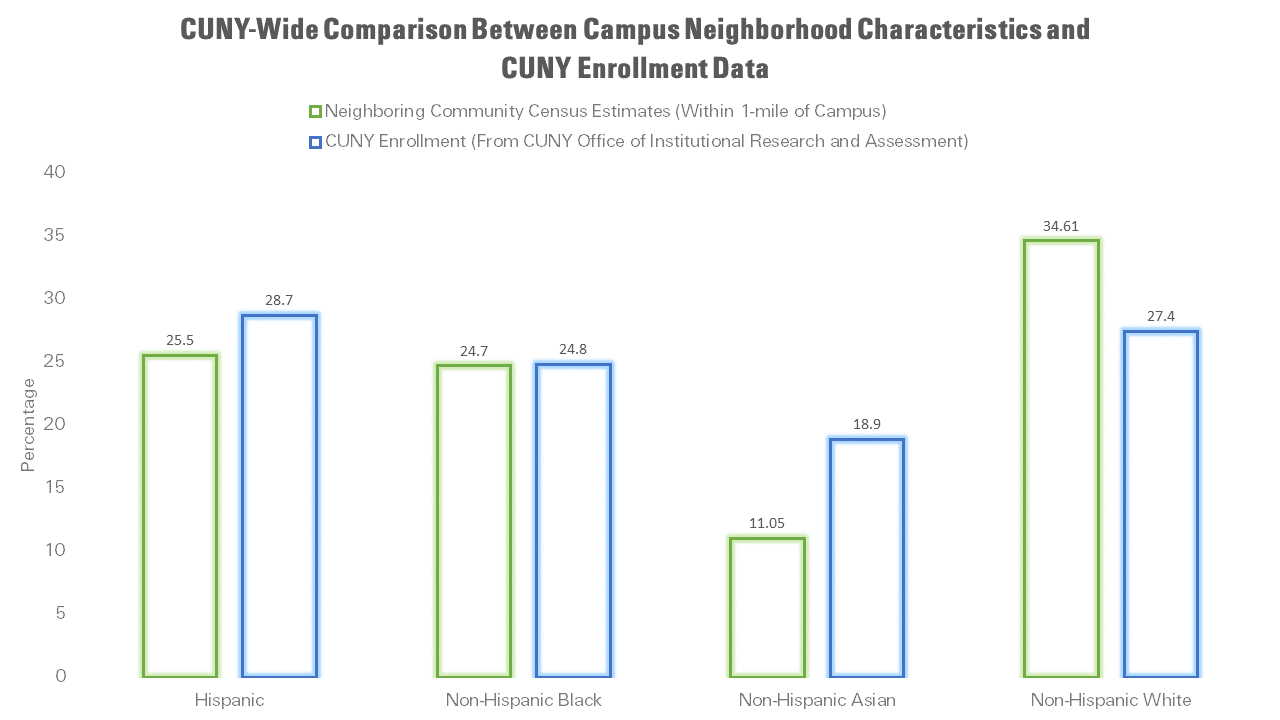 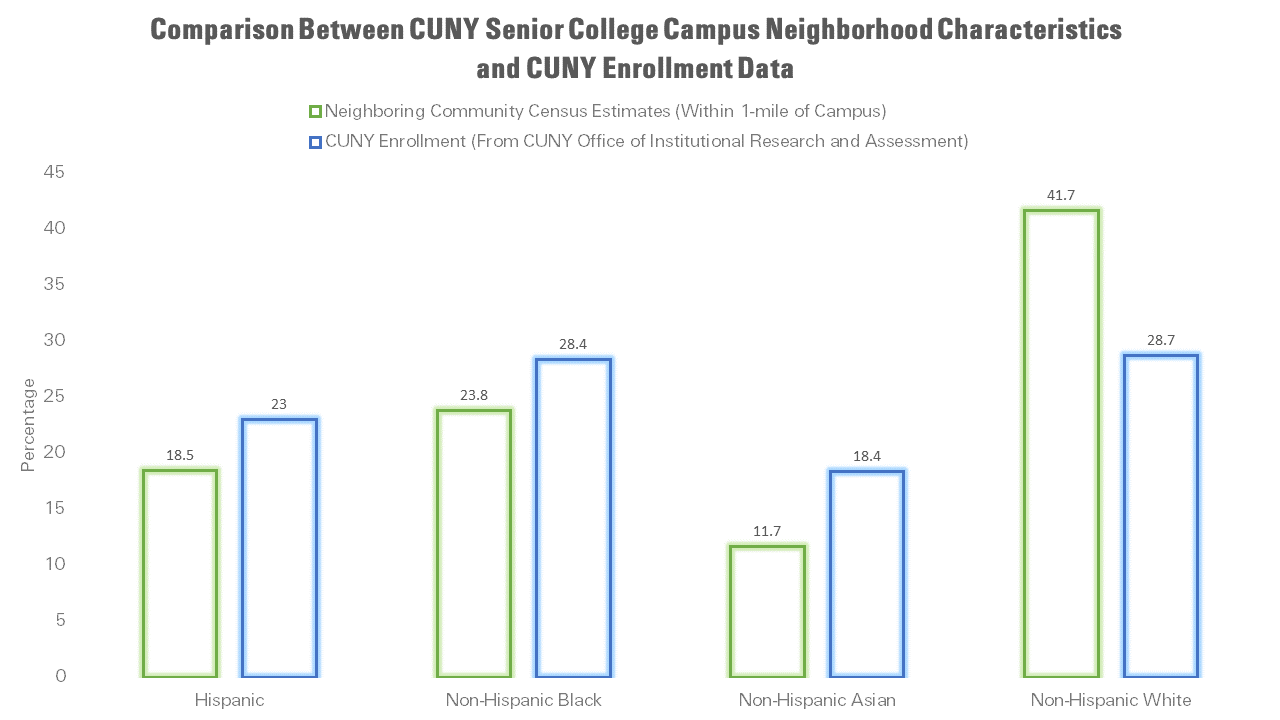 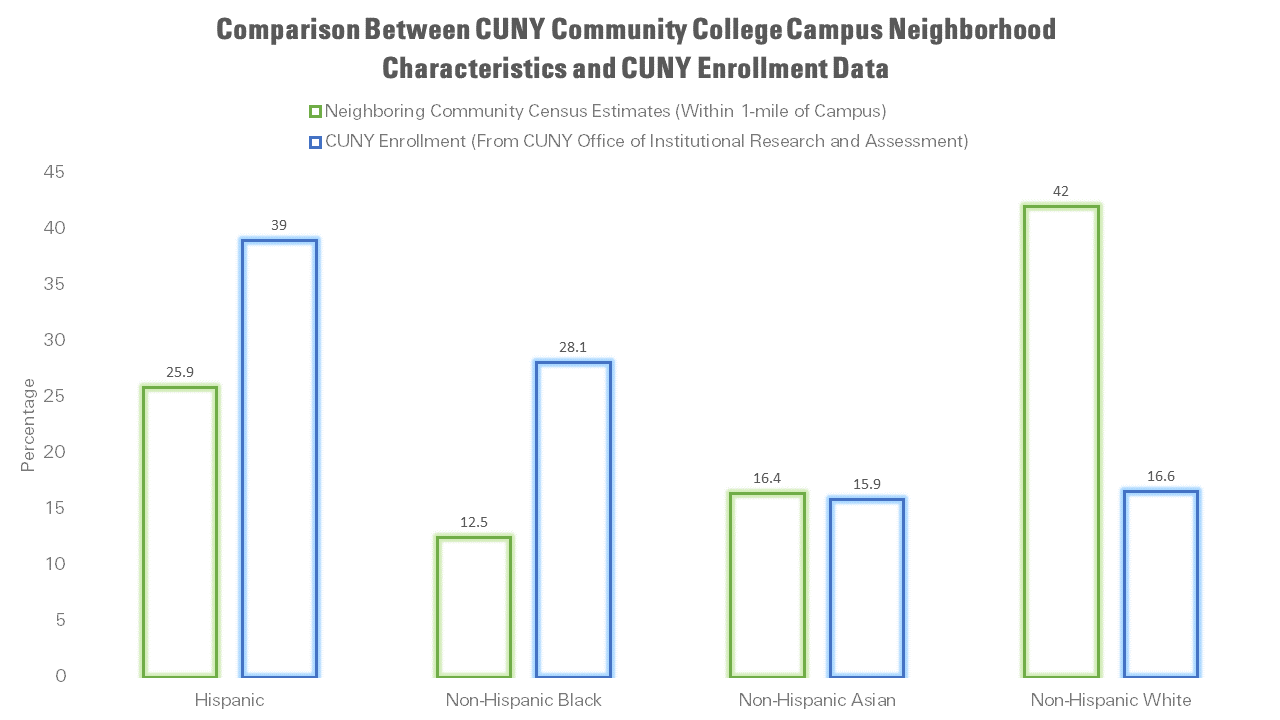 The maps included below are best viewed as a series. Compare and contrast the race and ethnicity maps with the maps on poverty, income, and bachelor’s degree attainment and correlational patterns emerge. Areas with lower average incomes, lower bachelor’s degree attainment, and higher percentages below the poverty line tend to be areas with greater racial and ethnic minority percentages of the population. 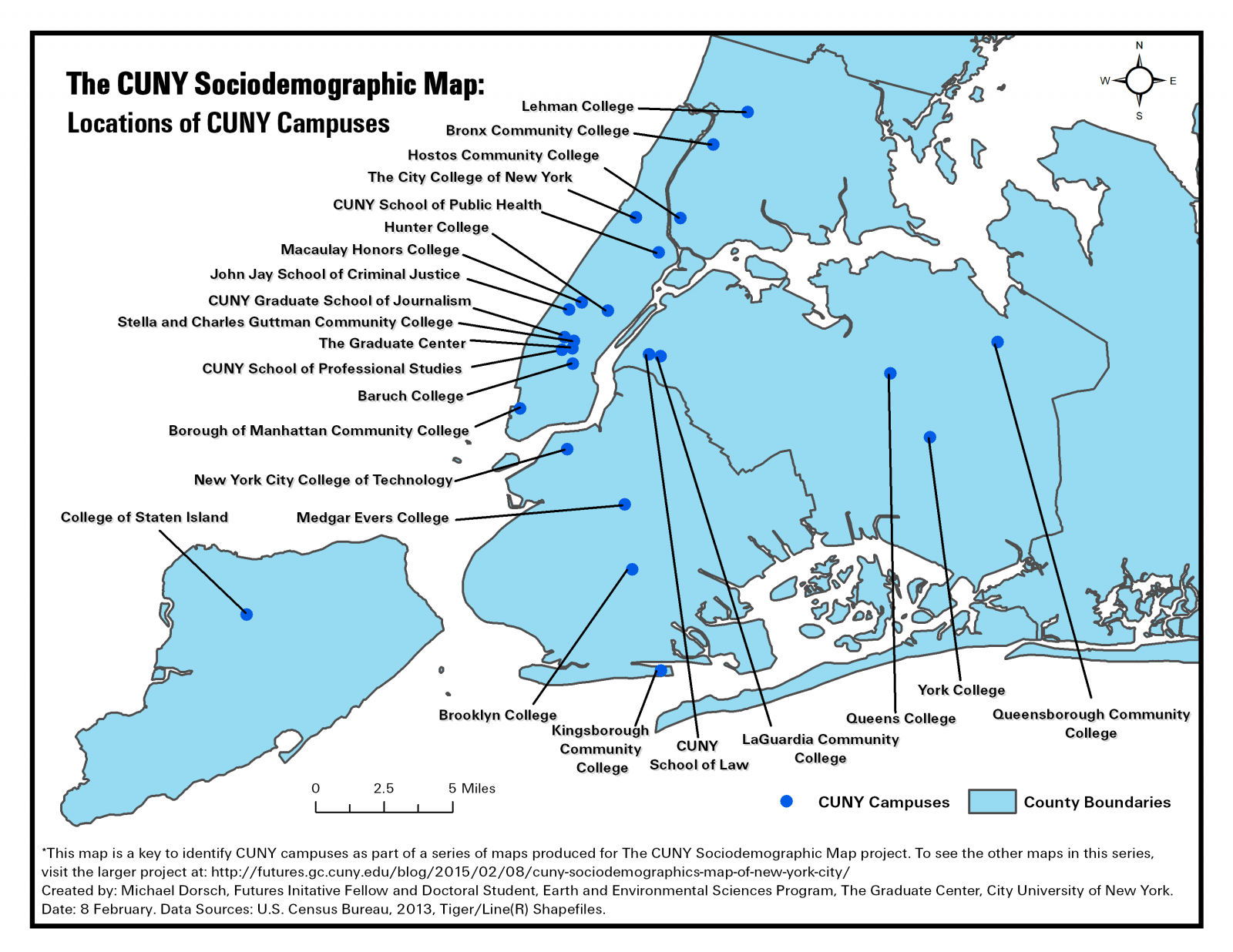 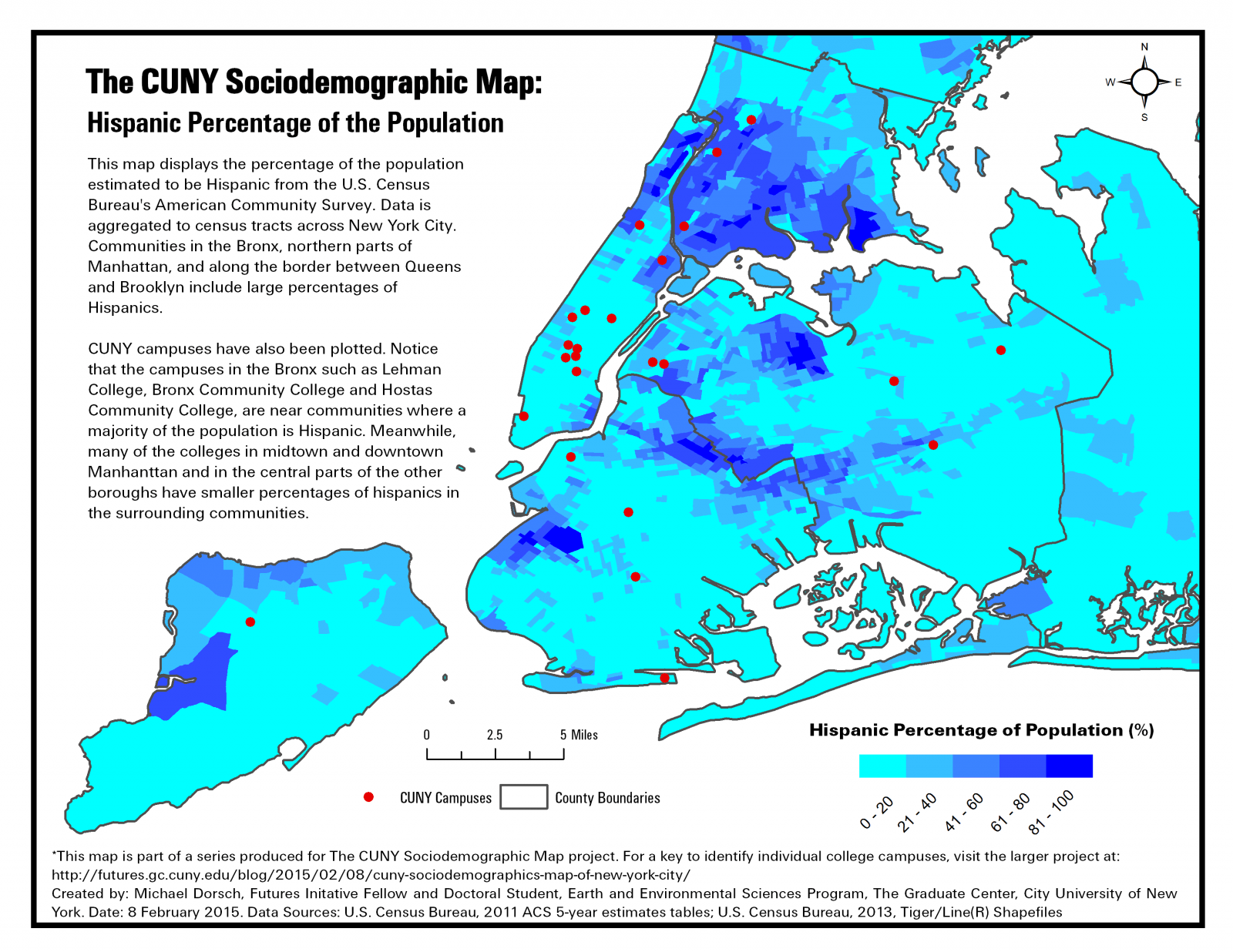 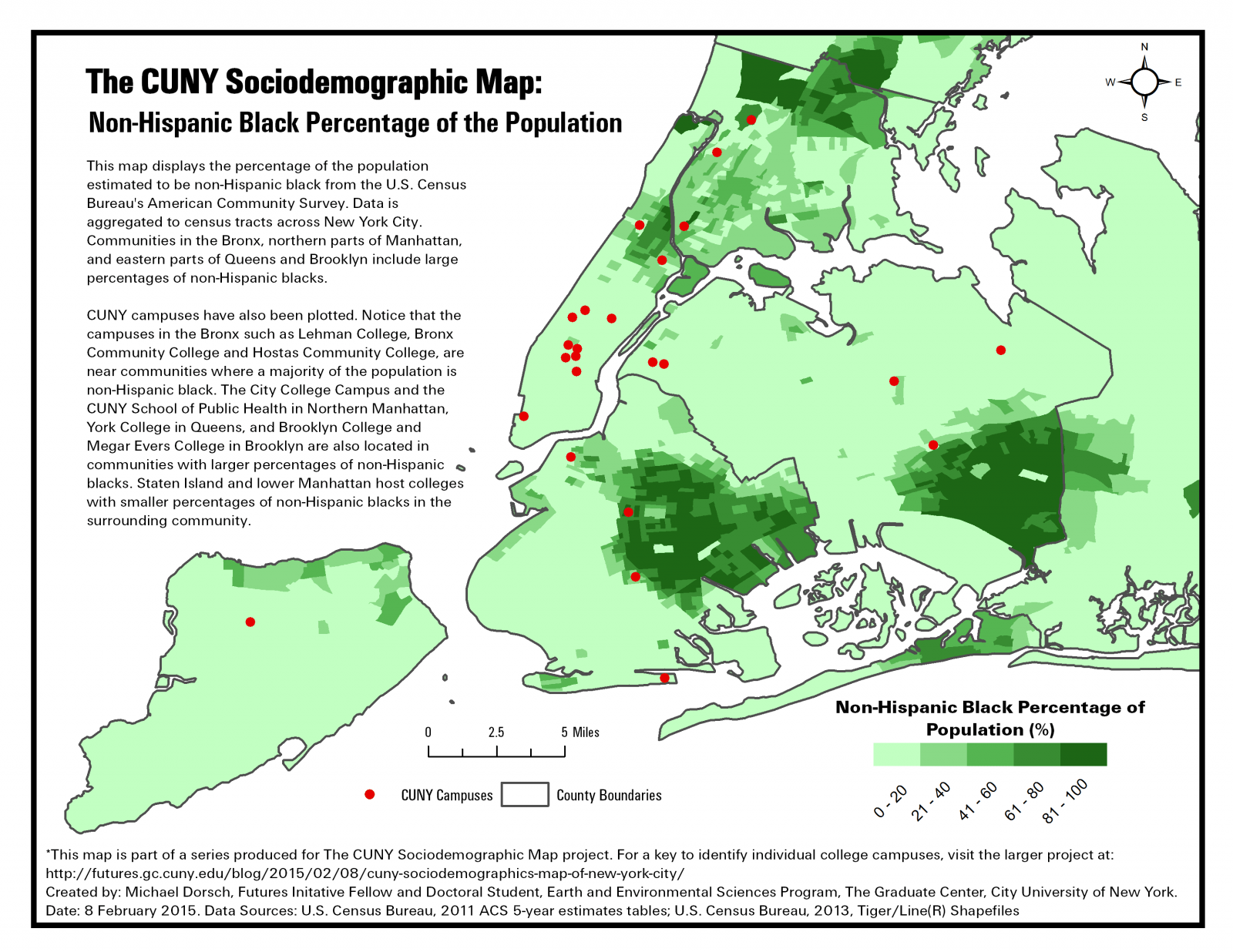 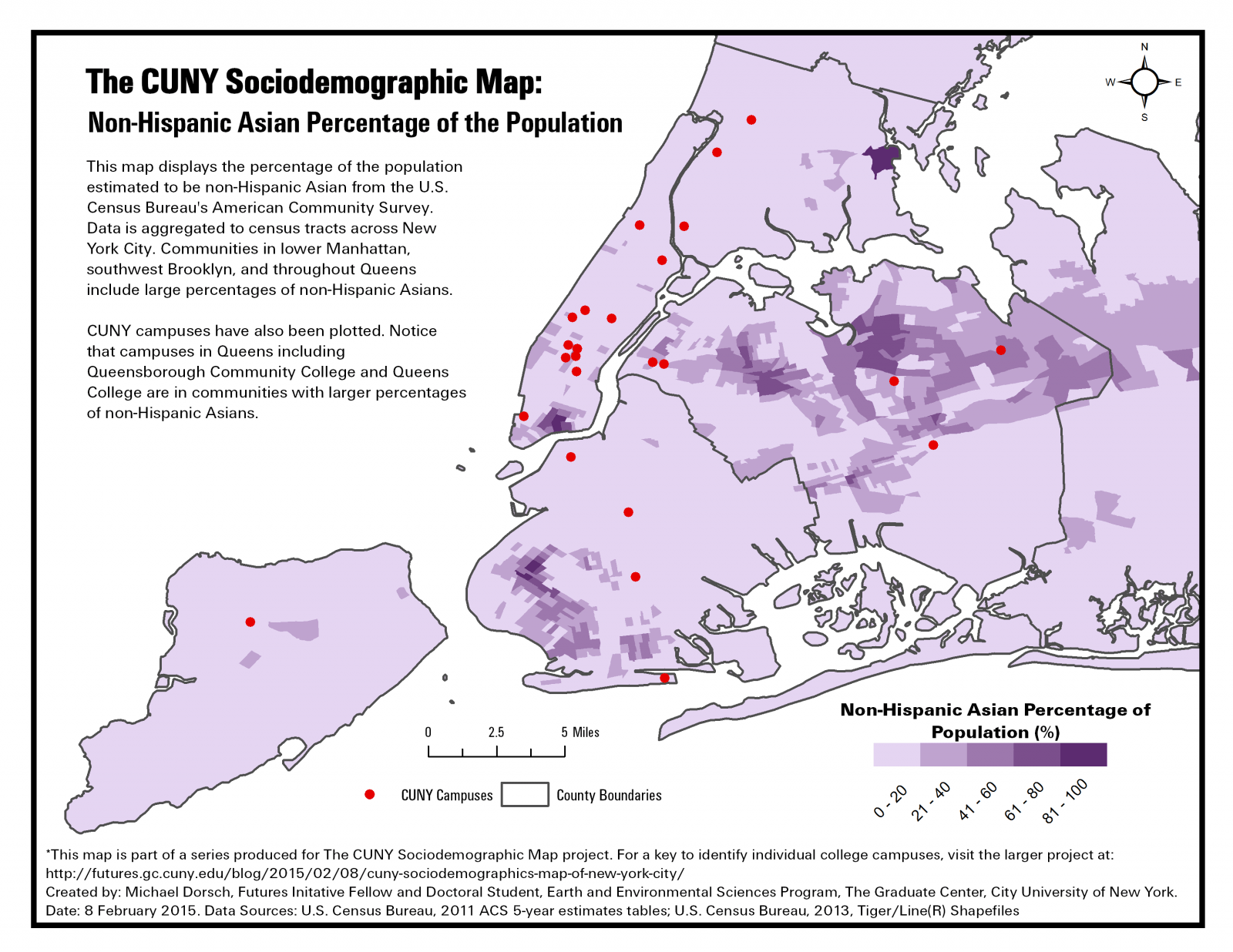 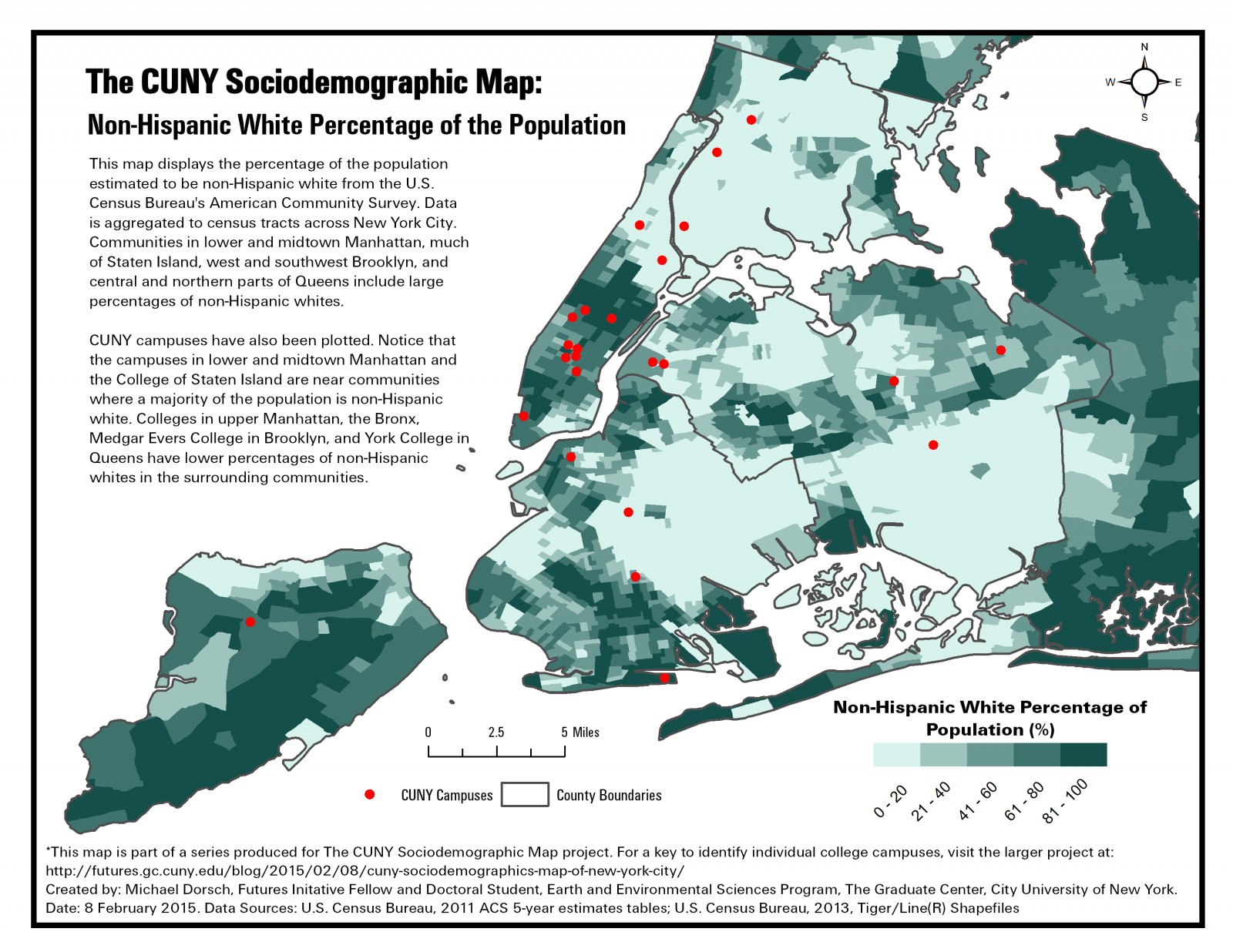 In addition to mapping the city-wide distribution of these sociodemographic characteristics, we also aggregated the percentages obtained from the buffer analysis in ArcGIS for each campus. These are available in the Maps Marker map below. The data on CUNY enrollment for each campus from the CUNY Office of Institutional Research and Assessment is also provided for comparison with the sociodemographic data from the census tracts within 1-mile of campus. Click on each marker to see the individual analysis snapshot for each campus in the CUNY system.

Another factor to consider is that enrollment numbers may be reflective of a certain age group (the average age of college students [18-24]). The community population numbers from the U.S. Census data are reflective of the entire population living around a campus (not just the college-aged population). This brings up the important distinction that this analysis is not comparing apples with apples. Based on the data that we have available and have used in this analysis, we cannot say whether the population being captured in the CUNY enrollment numbers is the same as the population captured in our city-wide buffer analysis of CUNY campuses. In all likelihood, the populations are not the same. Students enrolled at an individual campus may be coming from much farther than the immediate neighborhood (defined in as 1-mile from campus here). They may even be coming from another borough or from outside of New York City.

The only thing we can say with some certainty is what sociodemographic characteristics are like around the individual campuses, at least according to the census data used in this analysis. Comparisons can be made between the CUNY enrollment data and these neighborhood sociodemographic characteristics so long as we keep in mind the variations that may exist in the data we are looking at. Even with these caveats in mind, the fact that many of CUNY’s campuses have enrollment numbers that are more diverse  in terms of race and ethnicity than the populations in their immediate neighborhoods is still interesting. Future research may try to delve into these relationships in greater detail by exploring age distributions and by looking at the actual geographic distribution of students enrolled in each CUNY college.

The next phase of this project to come in a follow-up post will be looking at economic and educational data in the neighborhoods around each campus.

How Was This Analysis Done?

We posed the following questions to guide our research:

To try to answer the first question, we obtained data from the U.S. Census American Community Survey estimate tables “Hispanic or Latino Origin by Race” (ID=B03002), “Selected Economic Characteristics” (ID=DP03), and “Educational Attainment” (ID=S1501). After isolating the individual race/ethnicity variables we wanted to include as well as percentage of the population below the federal poverty line, percentage of the population with a B.A. degree, and mean income, we joined this data to census tract shapefiles in ArcGIS. We also added geocoded locations for each of the CUNY college campuses obtained by geocoding addresses for each CUNY campus. Next, we create 1-mile polygon buffers around each of the CUNY campus location points in ArcGIS and then used the selection tool to aggregate the socioeconomic/demographic data from census tracts that had their centroid within the buffer zone. Each of these selections were then exported as tables that could be used in Excel for comparison with the CUNY enrollment data. Maps were then created showing the sociodemographic data for census tracts city-wide along with the CUNY campus locations. Charts were created using the buffer analysis selection tables and the CUNY enrollment data from the CUNY Office of Institutional Research and Assessment. The flow chart below illustrates these steps.

Average income, educational attainment, and poverty rates of neighborhoods near CUNY campuses will be explored in the next phase of this work. 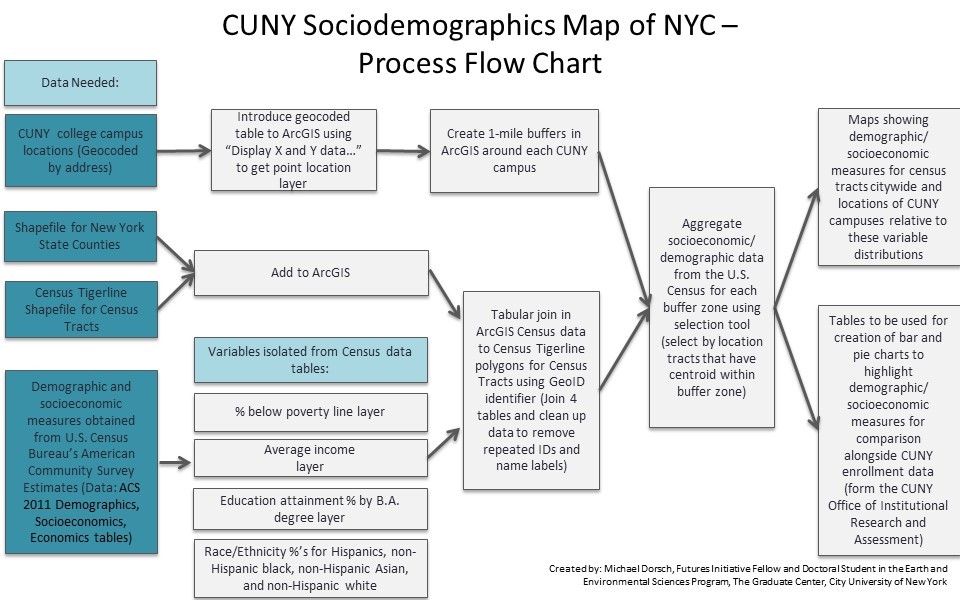 Note: Step by step instructions will soon be posted as resources for those interested in conducting their own similar analyses.