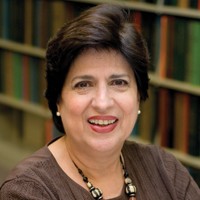 The Graduate Center joins you today in celebrating support for bilingual programs in the United States. At The Graduate Center and throughout all of City University of New York we are committed to advancing research, policy and practices in bilingual education, and to multilingualism and diversity of all kinds. So it is especially fitting that we join you and the Embassy of France in announcing an education fund that will support Francophone communities in their quest to ensure that their children become and remain bilingual, and that in so doing, the gift of bilingualism is spread to others.

An American bilingual education tradition has existed from the time of our founding as a nation. The efforts of the Latinx communities during the Civil Rights era unleashed the modern era of bilingual education. But those efforts have often been thwarted by xenophobia, racism and linguicism, and a belief that American minorities should speak English only. In recent years, through the efforts of many of you in the Francophone community, the French embassy, and the tireless work of M. Fabrice Jaumont in collaboration with the New York City Department of Education, bilingual education is making a U-turn in the US, a turn fueled by the desire of American families to have their children schooled bilingually, and by a realization that we are living in a highly interconnected world. As the Francophone community clamors for bilingual education for their children, it also speaks for other communities that have been rendered voiceless because of immigration policies and poverty.

I speak for my CUNY colleagues when I say that we are grateful to the Francophone community for sounding the Alertez!, and for the generosity of many of you who have contributed to the fund. We are also grateful for our joint involvement in supporting education that would give all children the possibility of becoming bilingual, not just in the U.S., but also in France and beyond, and not just in French or Spanish, but also in Arabic, Haitian Creole, and the many languages of children and communities throughout the world.

diversitymultilingualismOfelia Graciauniversity worth fighting for
Sign Up for Our Newsletter!