The event began with a welcome address from Cathy N. Davidson (Founding Director of the Futures Initiative), who greeted our panelists and colleagues. 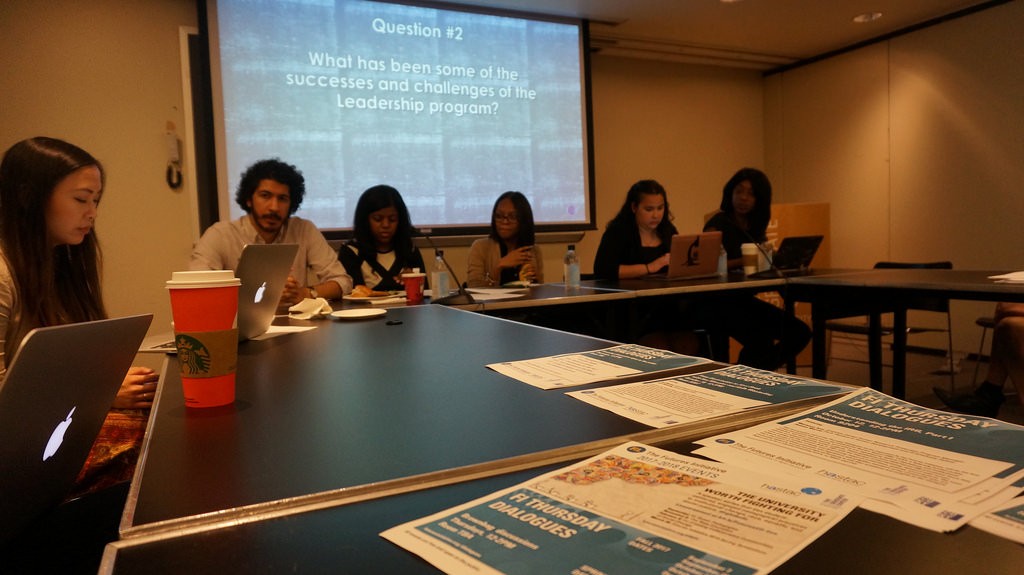 Lauren Melendez started off by saying that this program is the latest iteration of the program from the Leadership, Liberal Arts, and the New Majority Teagle Grant. Lauren then provided an overview how CUNY succeeds in fostering students into mentors, but also how CUNY struggles to reach out to the students who are struggling academically. Lauren spoke of how significant it is for students to have a successful introductory year in college and how that plays a role in feeling a sense of connectedness to their campuses. However, as Lauren stated, CUNY is a commuter-based community, meaning that students and teachers travel from boroughs to get to CUNY campuses and the connections they build in their CUNY campuses are often short and temporary. In addition, while CUNY offers resources for students to be successful, the chances of these resources reaching these students can are slim. Thus, one of the driving forces of this program was to offer support for students in building meaningful relationships and participation.

With that being said, Mike kicked off the discussion with the question for each of the panelists, how has your CUNY experiences shaped your involvement in the program?

Mike started off by speaking about his own transformative experience taking part in the Peer Activist Learning Community at LaGuardia Community College. It was in this project where he began to develop his voice and build solidarity with his peers. This experience in PALC is what shaped his involvement in the program. Thus, when offered to co-direct this program, Mike was thinking of how to translate what he did in PALC into this current program, specifically, how can we as a program disrupt feelings of isolation that are often experienced as being a college student? How can we structure in the experiences and backgrounds of the leaders in this program? And lastly, what student-centered teaching and learning practices can help us address these questions? 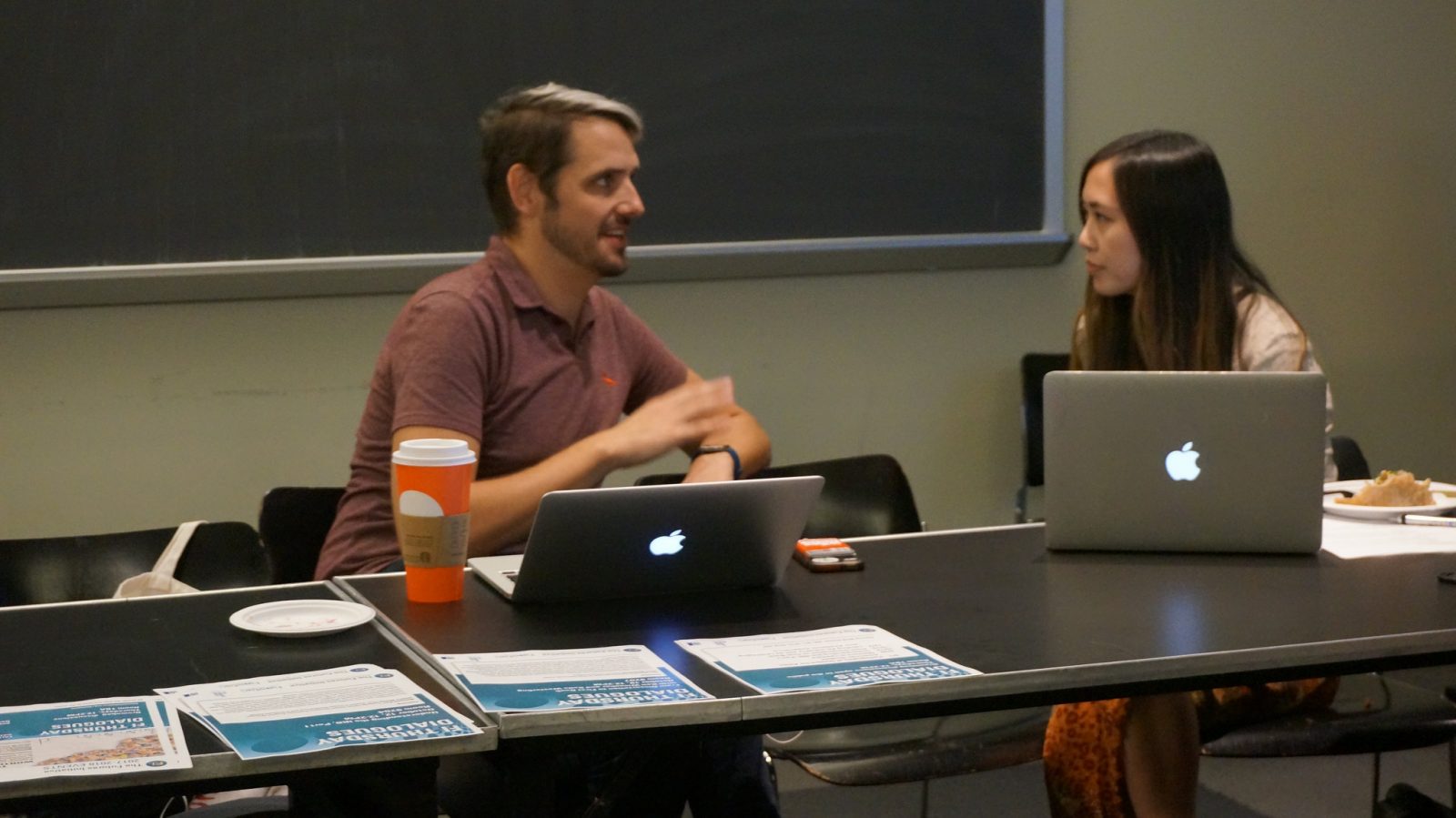 Lauren entered the discussion by saying that during her experience as an undergraduate student at Lehman college, she did not have programs like Futures Initiative or The CUNY Pipeline program. For Lauren, this lack of accessibility is a huge problem at CUNY. As a result of the lack of knowledge of these opportunities, students think they just need to work extra hard (take up part-time jobs, for example). Lauren ended by saying how proud she was to have the opportunity to pass down resources for students, like Cherish Cumma, who is a second year Leadership fellow and was recently selected as a  the CUNY Pipeline Fellow.

Jenny Perez Bruno, expressed that until last year she felt that she was “falling through the cracks” of being successful in college. While Jenny mentioned that she does get support at LaGuardia Community College (where she earned her Associates degree) she currently struggles to find resources for her major in Biology at City College. Jenny then shared her experience of being in City College and seeing how scarce resources were there. In addition, the competitive nature of her major in Biology also makes it stressful to get by. That is what led Jenny to join this program to broader her opportunities of resources.

Kashema Hutchinson chimed in and spoke from her experiences also being from City College and said that she experienced a similar situation like Lauren’s. Student life at City College was all about schoolwork, returning home after classes and returning back to school only for class. It was only toward the end of undergraduate experience that she started to take part more social engagements on campus. Stemming from these experiences, Kashema is inspired to create bridges for the Leadership fellows and to combat the disconnect she felt on campus.

Cherishe Cumma, who is a current student at City Tech shared that at first she didn’t get accepted into any CUNY schools due to there her SAT scores not entering the system on time. An advisor was able to finally get into City Tech and now uses this experience and mindset of applying to programs and scholarships no matter what how impossible it may seem. 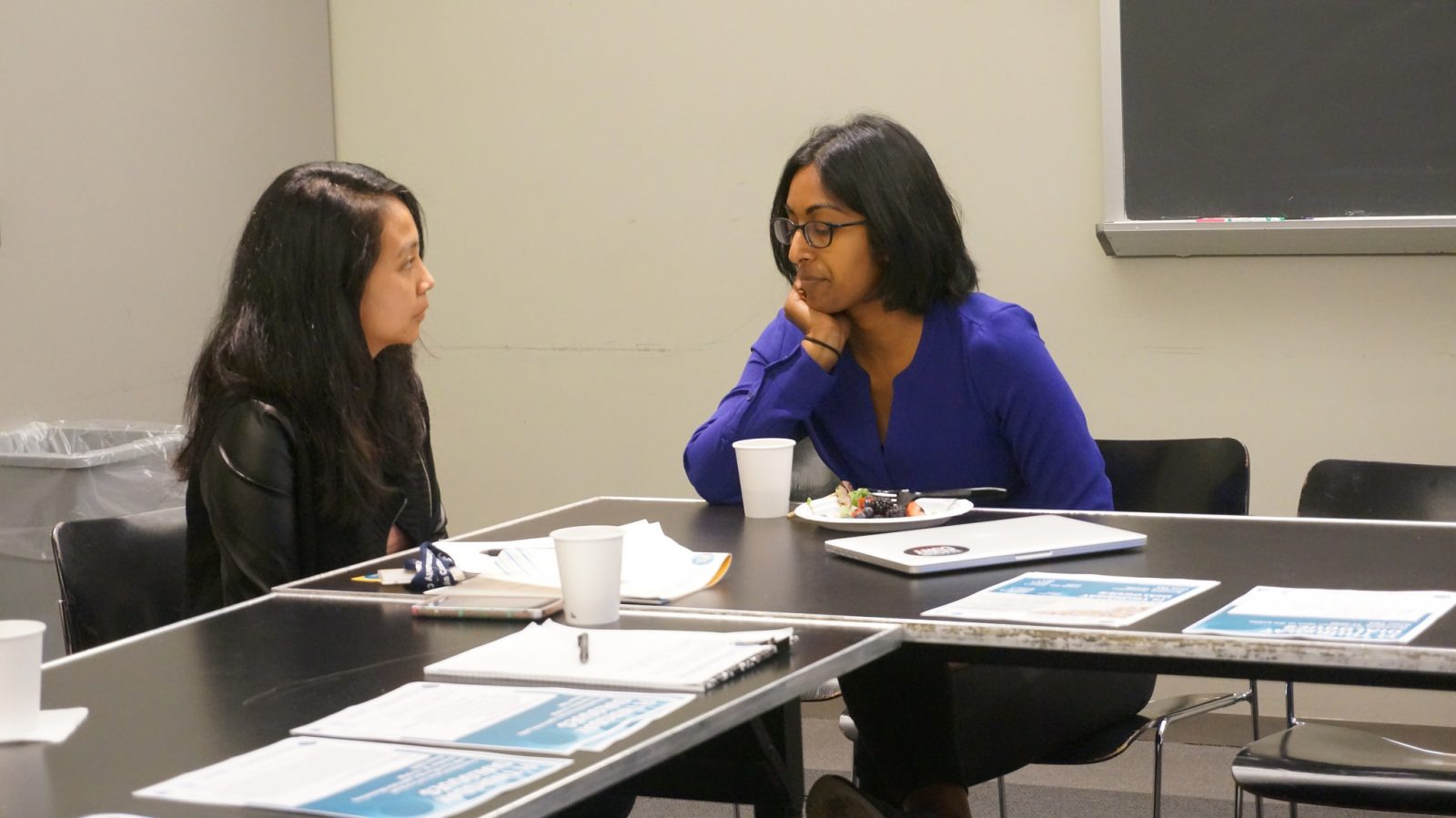 Mike started out by saying he believes we have created a place where students feel like their voices matter and are heard. Summer workshops and our blog have been effective in creating spaces for students to reflect on their experiences, especially if they’re not as comfortable talking in a large group allow students to be part of conversation.

In agreement with Mike, Lauren shared the many achievements the program completed throughout the years, which includes the fellows posting over 150 posts last year on the blog, presenting for the Futures Initiative Spring Symposium, design, editing of the book, Structuring Equality: A handbook for Student-Pedagogy. In March, Mike and Lauren with a previous Leadership fellow of this program,  Estefany Gonzaga, presented a poster at the AAC&U Diversity, Learning, and Student Success conference. In addition, from that presentation, Cherishe Cumma was invited to write an essay for Democracy and Diversity magazine reflecting on her experiences in the program. 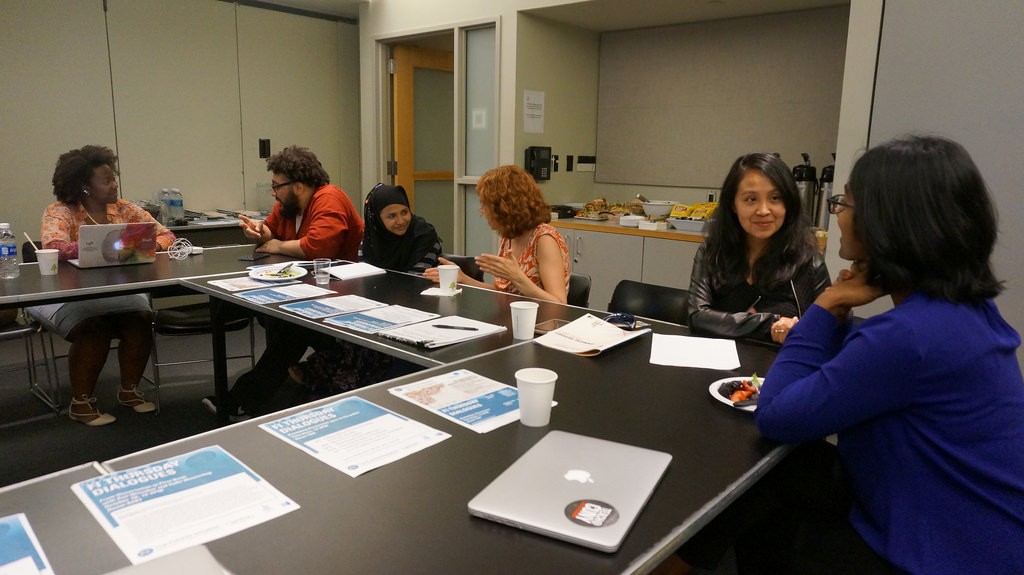 Mike speak on the topic of retention as one of the main challenges of the program. For instance, last year the program started with thirty students,  but by the end of the year, there are only 8-12 left. Another challenge is balancing work on program with other projects and research.

Lauren then chimed in and discussed how time-management in balancing a full time administrator position and being a graduate student and whatever time is leftover for your own life can be very challenging. Kashema also drew from this point that balancing the multiple lives and goals of being a graduate student is a constant challenge for her. Lauren also explored the challenges of finding ways to engage students, but also keeping in mind that time and money are limited.

The last question of the day was directed for the leader fellows, Cherishe Cumma and Jenny Perez Bruno.

How has the program impacted your life? And what more can this program offer to your experience as a CUNY student? 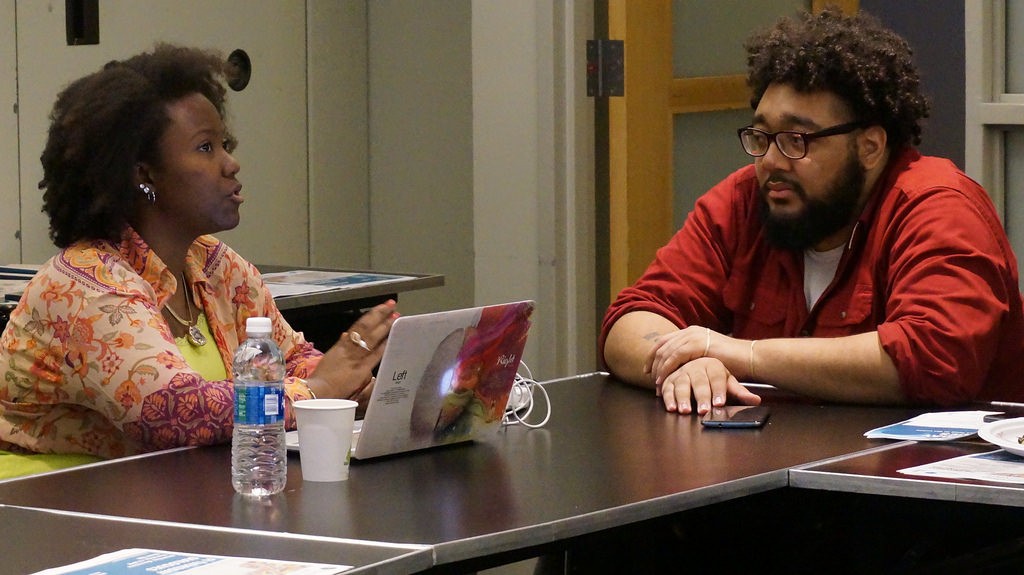 Cherishe said, Yes! Being part of this program has significantly impacted her journey as a CUNY student. She then shared her personal story about first applying to CUNY. As she was applying to CUNY, her friends and family would often make disparaging comments to her about going to  CUNY (e.g., why CUNY? Isn’t SUNY better?). However, as a CUNY student she learned quickly that you need to discover the many  “hidden treasures” in CUNY, this program being one of them. According to Cherishe, “CUNY is what you make it not what people tell you it is.” Cherishe concluded by sharing examples of how she discovered opportunities in CUNY, she could not find anywhere else such as, the CUNY Pipeline Program and the chance to be an editor for the “Structuring Equality” handbook.

Cherishe also mentioned she doesn’t see any flaws within the leadership program, she sees how hard everyone works to make sure that everyone feels welcome, included- like a big happy family 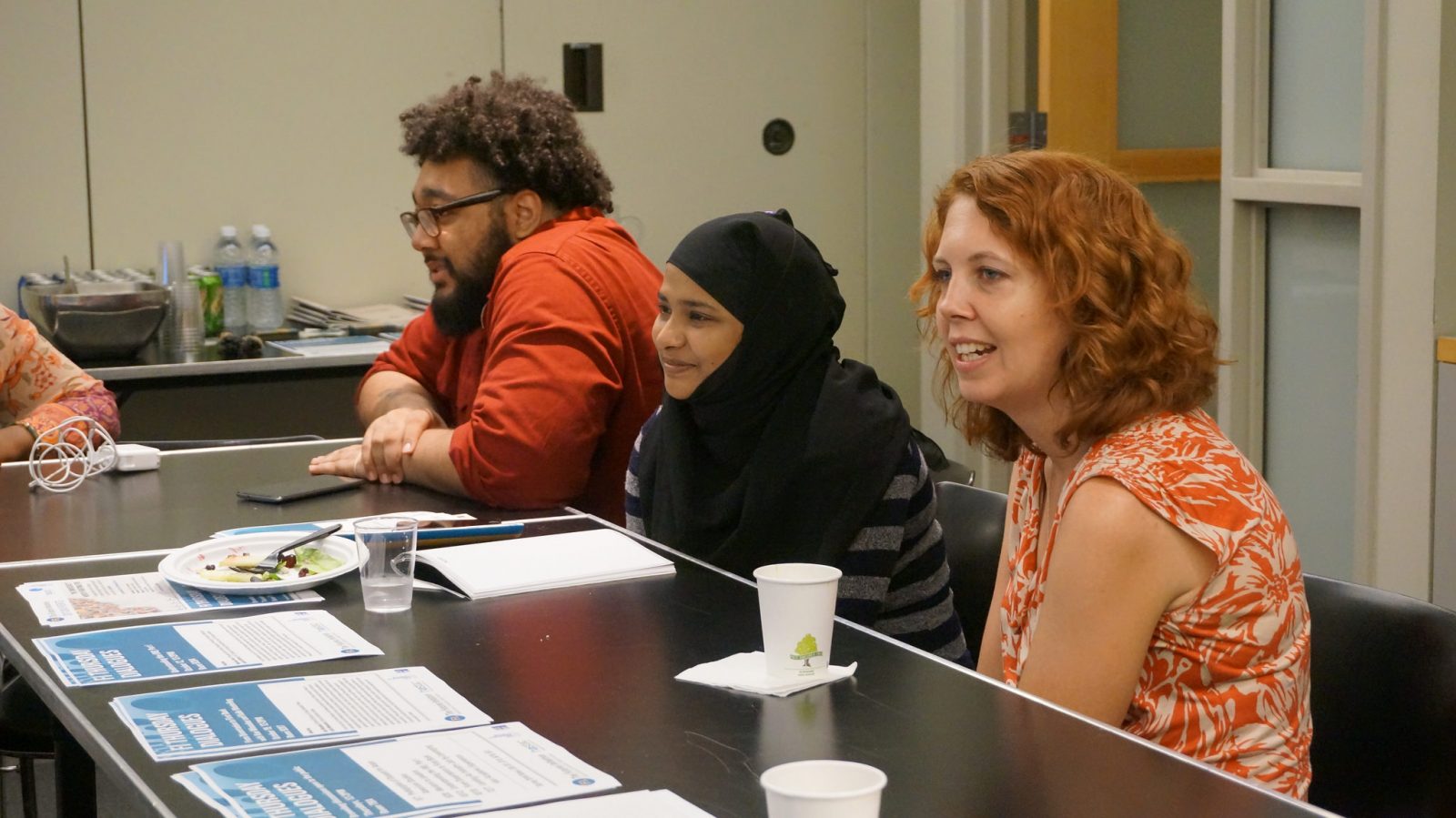 Jenny then contributed to the discussion by sharing a personal story of feeling demotivated about her school life and studies in biology. In fact, after a stressful semester, her professor had told that she should reconsider being a Biology major. Feeling despaired, this moment led Jenny to sit down and reflect on her goals and aspirations. She realized that she needed mentorship to receive constructive feedback on her future goals. Jenny also commented that this leadership program created a space for her to see that everyone is struggling and some even have the same struggles as her. Through discussing her situations with others in this program, Jenny said she felt stronger about her capabilities to do better in school. Jenny then concluded by saying as a result of this program, the year 2016 was a year she was able to make great strives in her professional career. For instance, last year she was able to present her biomedical research on proteins at Rockefeller School and she also had an “eye-opening experience” to participate in the Futures Initiative Spring Symposium where she felt a sense of community- other peers listening to and sharing in struggles.

Conclusion
This was an engaging Thursday Dialogue where issues and concerns ranging from retention, program promotion, and scalability were discussed. The Directors of this program, together with the audience members (consisting of Futures Initiative fellows and Undergraduate Leadership fellows) got together to reflect on the progress this program and how has it evolved throughout the past three years. Based on the many discussions that occurred, it was clear that it has been a rewarding experience for everyone involved and there are many exciting areas of opportunity for this program to grow. A main take-away from this panel discussion was the need to reach as many CUNY students as possible, but also to engage those CUNY students in total participation teaching and learning practices. As the semesters move on we look forward to the many new challenges and accomplishments of the Undergraduate Leadership program.