On Monday, November 6, 2017, we gathered in the Elebash Recital Hall at the Graduate Center, CUNY, for “Revolutionizing the University” with Distinguished Professor and Founding Director of the Futures Initiative Cathy N. Davidson, and Anya Kamenetz, Senior Journalist for NPR. Below are some highlights from the event and their conversation.

Kamenetz: “I asked you a question about education and you immediately turned it into social change.”

Provost Joy Connolly began the evening with introductions, saying, “The fact that you find Cathy Davidson here at the GC is no coincidence.” She reminds us that the Graduate Center (GC) is “one of the top 10 universities for awarding PhDs to graduate students from underrepresented groups” and GC students teach “over 180,000 undergraduates at CUNY each year.” Likewise, it’s no coincidence that Davidson sits next to Kamenetz, author of The Test, about the past, present, and future of testing in higher education. She also happens to have just completed the New York City Marathon, as Davidson tells us before they enter a conversation about her book, The New Education: How to Revolutionize the University to Prepare Students for a World in Flux. 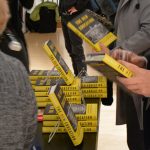 Kamenetz asks Davidson where the title for the book comes from. Davidson says the title comes from Dr. Charles Eliot, who wrote a scathing indictment of education in 1869 called “The New Education.” At the time, you could not teach at Harvard without a personal income because the salaries were so low. Eliot went to Europe and studied the Humboltian system, and returned to argue that we need to create “the new education” to create a professional, managerial class. Davidson says, “I stole the title because I believe that we need a new education now. We need to rethink everything in our era–that was what Eliot and his colleagues did.

Davidson assures us that the new education exists right now, at colleges and universities around the country, but on the periphery. It’s happening at centers and institutes that connect knowledge rather than focusing too much on credentialing or debates between science and the humanities. Davidson says, “We live in a world where those things aren’t distinct any more. We need to prepare students for this world, and to understand the world we’re living in a far deeper and more complex way.” 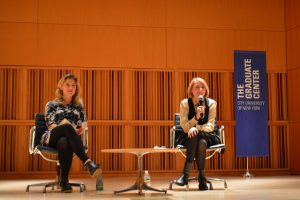 Kamenetz brings the conversation to the cost of education reforms, asking “Are we going to convince people to spend more money for higher ed?” Davidson responds, “We don’t seem to be in the current political moment,” calling attention to the economic burden put on students. Kamenetz responds, “Your economic argument is a little panic-inducing, and other parts are optimistic. How do you reconcile those two things?” Davidson says that’s why she came to CUNY: “This is the most expensive city in the country, but your kid can get a quality education.” She continues to push that this needs to be a nation-wide movement to address all the things that make it difficult to be a student, from high tuition costs to food and housing insecurity. 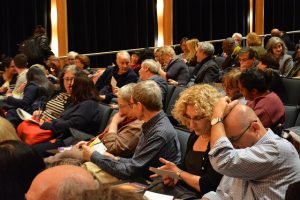 Kamenetz brings up the question of digital literacy and Davidson flips it back to her because, she says, Kamenetz is “one of our great theorists on how to use the internet.” Kamenetz responds: “I think where we meet in common is this love of humanity. You do this in your pedagogy. At the heart, digital literacy is about knowing yourself. How much attention do I have to spend in a day? Knowing what questions to ask and when there are gaps in your knowledge. What do you mean about the ethics being the beginning of digital literacy?”

Davidson responds: “We need not just ethics but defensive ethics. We have to think not just about our own ethics but how we bring ethics into the things we do in our lives. We give our information constantly to people who do not have our best interests at heart. We need a renegotiation of our terms of service.”

Kamenetz’s response is my favorite of the evening: “I asked you a question about education and you immediately turned it into social change.” And Davidson’s response? “Exactly.” She continues: “I 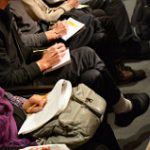 f education is worth anything, it has to be about social change…I also think many of the things we blame on education are also social problems.”

Before opening it up to Q&A with the audience, Davidson does a Think-Pair-Share with the audience, asking each person to write down their burning question and share it with a partner, then come up with a workshopped question together. There’s a buzz in the room as everyone discusses their burning questions before the Q&A begins. After a lively Q&A, everyone convened in the James Gallery to continue the conversation during the reception.

To listen and watch the full event, stay tuned on the GC’s YouTube channel. 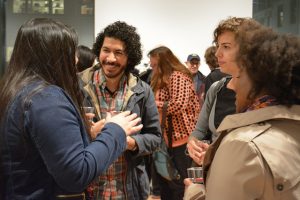 anya kamenetzcathy davidsonThe New Educationuniversity worth fighting for
Sign Up for Our Newsletter!