The Modern Language Association conference this year has already proven to be more politically engaged, at least in my experience, than the previous year. I heard Lauren Klein discuss the #MeToo movement and what’s at stake in the Digital Humanities, I spoke with Emily Brooks at the HASTAC meetup who shared with me that most readers of Harry Potter are anti-Trump, and I connected my paper on Thoreau’s Democratization of Music to the government’s gag on the CDC, prohibiting the use of certain words. When I sat down to hear a star cast present at the Presidential Plenary panel, I was ready to learn from the best, and my goodness, did they deliver! 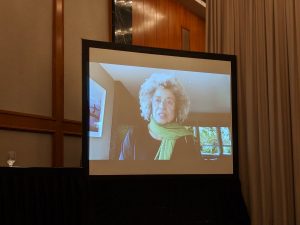 Angela Davis, who could not be present due to the snowpocalypse that hit the east coast on Thursday, presented a brief video talk from the bold and brave perspective of a non-MLA member. Most memorable for me was her statement that she was disappointed that the MLA allowed a resolution to pass that would prohibit conversation about Palestine. She is and will forever be my hero. The audience clapped, loudly, in response. 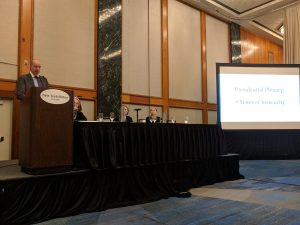 Next up was Anthony Romero, lawyer and Executive Director of ACLU, who Diana Taylor introduced as having had “a very busy year.” There was so much to take away from his talk, but the highlight for me was his affirmative statement that WORDS MATTER. It was good to hear after such a long year. He continued, “words have power … and they can be used in the court of law” as a means to obtain justice. He said, “This is a time to engage vigorously with the world … Academics are often accused of living in an ivory tower, … but the academics I know are engaged in the communities you live in, you form, and you develop.” Instead of fearing losing cases, he said his greatest fears are cynicism and fatalism, which Cathy Davidson picked up in her talk that followed. 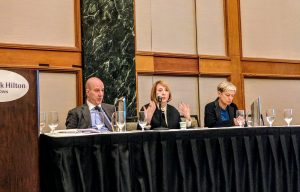 Davidson took Romero’s statements about smart political engagement to the local level – teaching us how radical pedagogy is a practice that can revolutionize a classroom, an office meeting, a dinner conversation, community organizing, and basically every interaction you might have. But, she says, “What seems like a minor transformation requires enormous individual responsibility.” She cautions against excuses for a syllabus or curriculum like “content” and “coverage” instead encouraging structural change. She says, “We are schooled to structure inequality – you can’t reverse it with critique or with goodwill – you must make change happen at the structural level.” If you missed it, Cathy has written a helpful blog post that will catch you up on what you can do today to make change happen. 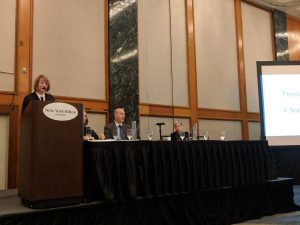 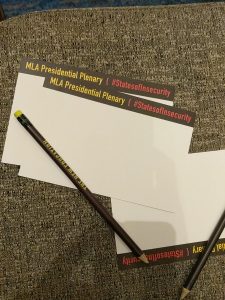 Demonstrating how to do this, she engaged the entire audience in a think-pair-share activity. I’ve seen this done in many different settings since I’ve entered the Futures Initiative as a fellow, but it really was something else to see this happen at MLA with people like Diana Taylor, Judith Butler, and Jack Halberstam in the room. I have to say that this is now the first major conference I’ve been to that has seen some radical unstiffening. I watched a famous professor play a 200-year-old flute during his talk, I listened to a presentation given by a person via Skype who was able to engage with the audience during the Q&A, I found a way to sneak Kermit the Frog into my presentation, had a dinner conversation with two senior scholars about how they had children and made it work all the way to tenure, and now I have participated in what was essentially a group work activity in an audience of 300-400 people. I’m a relatively new kid on the block when it comes to MLA, and I don’t know if its setting in New York City had something to do with it, but I feel that exciting changes are happening and it makes me excited to be a part of academia (…and I’ll admit I’ve let myself get a bit jaded lately). 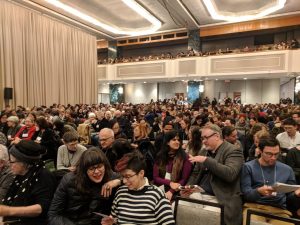 Since Juan López Intzin was unfortunately unable to make it to MLA in the storm, Taylor read excerpts from Intzin’s paper on the epistemologies of the heart; his work coincides with the zapatista uprising but also goes back to ancient Mayan texts. He reclaims the heart as something that is much more than just an organ — it is everything that ties us together, it’s “this space, this being, feeling, thinking, and doing.” He claims that an epistemology of the heart began “when we started to unthink and rethink our place in the world.” In the words of @kallewesterling, Intzín is trying to unthink “the Western epistemic violence against native peoples, thinking through knowledge starting from a different place. #mla18 #s360.” 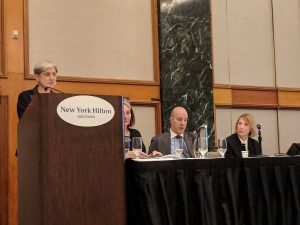 Next up was Judith Butler who gave a wonderful Kafkaesque performance on indefinite detention, which, she says, “is clearly the deprivation of freedom, depriving the detainee of the knowledge of the reasons for detention … justice is then in question … detention, waiting for legal process is the punishment.” She uses The Trial as an example of the circular bureaucratic logic we get stuck in as a form of punishment – the novel functions as an extended pre-trial proceeding for a trial that will never come; the allegation becomes the evidence, the form of the trial, and the mechanism of punishment. Butler applies this analysis in various ways. In the words of @PosttheColony, “#judithbutler – The solution has been for countries to claim that #immigrants have “never arrived” despite active efforts by a country to prevent them from landing or traveling.” And from @kallewesterling, “It’s fascinating to see Butler connecting key thoughts from a book like Undoing Gender, here, to Kafka, Israel, and current #statesofinsecurity.” Butler cautions us to make our meaning clear, saying, “When we talk about ‘the law’ we don’t know whether we’re talking about an ideal of law or whether we’re also talking about any number of legal processes that have in their name the destruction of justice in the name of security.”

I appreciated hearing Butler read her own work (this was a first in-person encounter for me), but I (like others) found myself getting lost and found and lost again throughout. Her voice and emphasis on certain sounds of words helped me to understand her meaning more quickly than when I read her silently to myself, but I think if I approached her more like I would an author such as Gertrude Stein, or even Wittgenstein, then I might get closer to understanding her ideas as they unravel like a ball of yarn. Her sentences rival Henry James and Virginia Woolf when read aloud, but the general impression one is left with is a kind of stunning of the mind. There are so many layers to the sounds of words, and it hadn’t occurred to me that her work might be better read aloud to really get at her meaning.

While I have been singing the praises (so far) of MLA’s seeming unstiffening, I have to say that the Q&A is where I have been repeatedly disappointed, now two days in a row. As others also noted on Twitter, the first question for this panel was given to a white male audience member and answered by a male panelist. A very long response chewed up time for other questions, and while I found the answer insightful and of course I adored the law-oriented syllabus Romero listed, from Wilde’s “The Ballad of Reading Gaol” to Orwell’s 1984, I started to wonder if he realized he was bulldozing through the 15 minutes. I wanted so badly for Taylor to cut him off, which was her right as moderator. (To be fair, later in the Q&A, I respect Romero for trying to engage Butler and Davidson more in the conversation and distribute time more evenly.)

This same exact thing had happened in the lovely DH panel I witnessed where Lauren Klein gave an incredible talk about sexual bias — and even though her talk was what @jeffreymoro called “the most important thing that’s happened at #MLA2018,” the questions kept getting directed at a male presenter and we never got a chance to talk about #MeToo and DH in the allotted time for Q&A.

We have got to structure Q&A better at MLA and at all conferences, meetings, and classroom settings. It was ironic that structuring Q&A time was not part of this panel–I thought Taylor’s original idea was to take several questions and then open it up to panelists to answer at will, but if that was her intention (or maybe I was projecting my hopes onto what she said to open it up), she didn’t follow through. I noticed that a woman of color nearly front and center kept raising her hand and was never called on–but then again the audience was too big for me to see any of the question-askers except the first so I can’t say whether or not traditionally marginalized voices were given talk time.

I know I would have liked to hear Judith Butler talk more about bridging theory and activism, but I was also incredibly intimidated by such a star panel, so I was yet another woman audience member who didn’t put her hand up in the first minute and I let a male participant take the lead instead. That’s something else I witnessed in my own panel the day before — two prominent senior women scholars in my field kept their hands down until it was time for question #3. I noticed it immediately, and I didn’t envy our moderator who had called on the first person who raised his (sigh) hand.

Moments like these used to make me feel defeated. Now they make me angry. The next step is action. Look out for a post from me about moderating Q&A in the future…

In the meantime! If you’re interested in hearing more about this event, I highly recommend reading Kalle Westerling’s post on HASTAC. It’s an excellent summary, and I tried my best not to repeat things so definitely check it out because I left out some things that his recap will definitely fill you in on!