—On Thursday, November 1, the Futures Initiative hosted a discussion as part of its University Worth Fighting For series. My colleague, Adashima Oyo and I co-organized and moderated what turned out to be a high-energy discussion about disparities outside the classroom that impact student performance and success in higher education, including access to transportation, healthcare, housing and food. We had an expert-packed panel with two professors from the CUNY School of Public Health, Nicholas Freudenberg and Chris Palmedo, the former Director of Travel Training for Department of Education District 75, Peggy Groce, and Ph.D. Student Jesse Rice Evans, who talked about her experience as a disabled student and adjunct lecturer. These issues are rarely talked about in an academic setting, or in conjunction with each other, but their parallels became clear by the end of the discussion.

The panel started off with a short presentation about the Healthy CUNY Initiative by Nicholas Freudenberg, Distinguished Professor at CUNY School of Public Health. Healthy CUNY aimed at improving the health of the more than 500,000 degree-seeking students and continuing education students by addressing the social and health barriers that impact academic success and graduation. In his 10 years of research with HCI, Freudenberg found that there were major problems for CUNY students that needed more attention. Their 2015 survey showed that nearly half of CUNY undergrads faced one of multiple issues that affected their ability to succeed in college, including barriers to mental health, sexual and reproductive health, health insurance, housing stability, and experienced intimate partner violence and food insecurity. The data still showed an improvement from 2011 after several interventions including an effort to get students signed up for healthcare through the Affordable Care Act and introducing food pantries into the Single Stop programs at community college campuses, which address poverty by providing free social, legal and financial services to students. While there is still work to be done on mental health issues (and Healthy CUNY is working to increase staff in mental health counseling centers), the takeaway is that interventions work and we can do more to help students with non-academic issues succeed. Luckily, there are a couple of new initiatives underway, CUNY Health for Academic Success, and CUNY Food Security Advocates Program. 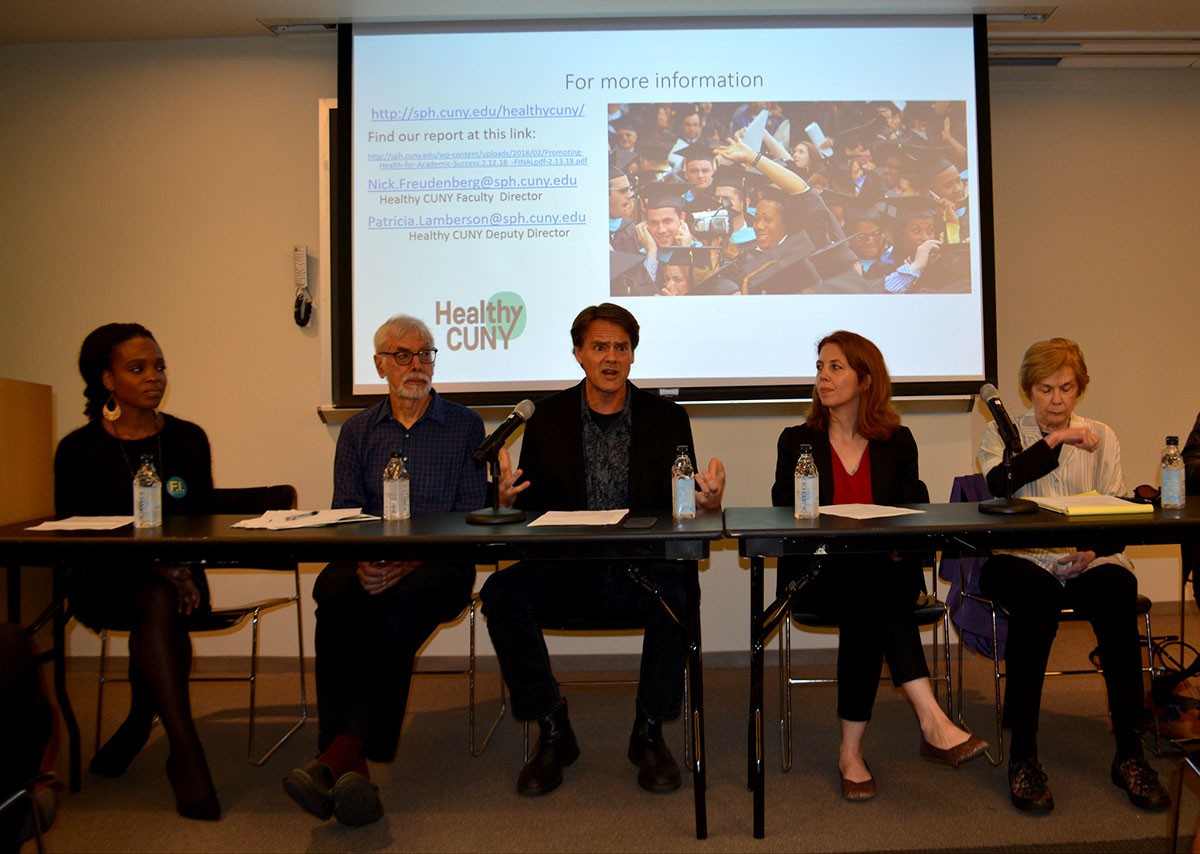 Chris Palmedo, Associate Professor of Media Marketing, & Communications at CUNY School of Public Health, and also part of the Healthy CUNY Initiative, spoke about his work on student health insurance. As a new professor who joined the School of Public Health just as the Affordable Care Act was getting started, he saw the importance of getting as many students enrolled as possible. He contributed to a marketing and social media campaign, as well as in-person tabling and other events to get students signed up for health insurance. At the end of their campaign, some eligible students had signed up for Medicaid, but the overall sign-up rate was very low. More research followed, and they found that about 10% of students were uninsured (roughly 25,000 students). Many found their choices with the ACA to be confusing and students and health insurance navigators felt unsupported by CUNY. What was most astounding was that some students just didn’t know about their efforts or about the Single Stop program on their campus. One of the most memorable quotes from the event came from Chris, “Why is it that coke machines pop up everywhere? Coke wants you to have a Coke within arm’s reach of every human in the world. How does that happen and yet they can’t figure out where the health office is or the Single Stop office?” Palmedo believes that there’s also an issue of stigmatization that goes with asking for help, whether it’s for food, mental health counseling, or getting insurance. These support offices are typically hidden down long corridors on most campuses and as a result, students may not even know they exist. He thinks we need to do more work to normalize seeking help by talking more about these issues and encouraging students to help themselves.

The second part of the panel was about the impact of transportation access and disability on student success. Mental health issues were one parallel to the disability issue from the first part of the panel, and both Rice Evans and Groce commented on the prevalence of anxiety and depression (illustrated in chart form in the first presentation), how students may be perceived by their teachers if they have severe mental health disabilities, and how we can better support them. Our first speaker was Peggy Groce, former Director of Travel Training for Department of Education District 75, where she worked since 1970. I first met Groce at an MTA executive meeting with disability advocates to discuss plans for improving accessibility in New York City Transit. I was in the midst of searching for literature on transportation interventions for people with disabilities and was fortunate enough to meet a pioneer in travel training, who had been teaching youth with multiple disabilities transitioning out of high school how to use public transportation independently. In subsequent meetings, I learned just how much those interventions can work, along with other determinants of student independence, including parents who don’t want to let their children travel alone. Groce is also a passionate advocate for access and often wonders (as I do) why we take transportation for granted even when we see how a lack of access to transportation can impact our lives in profound ways. 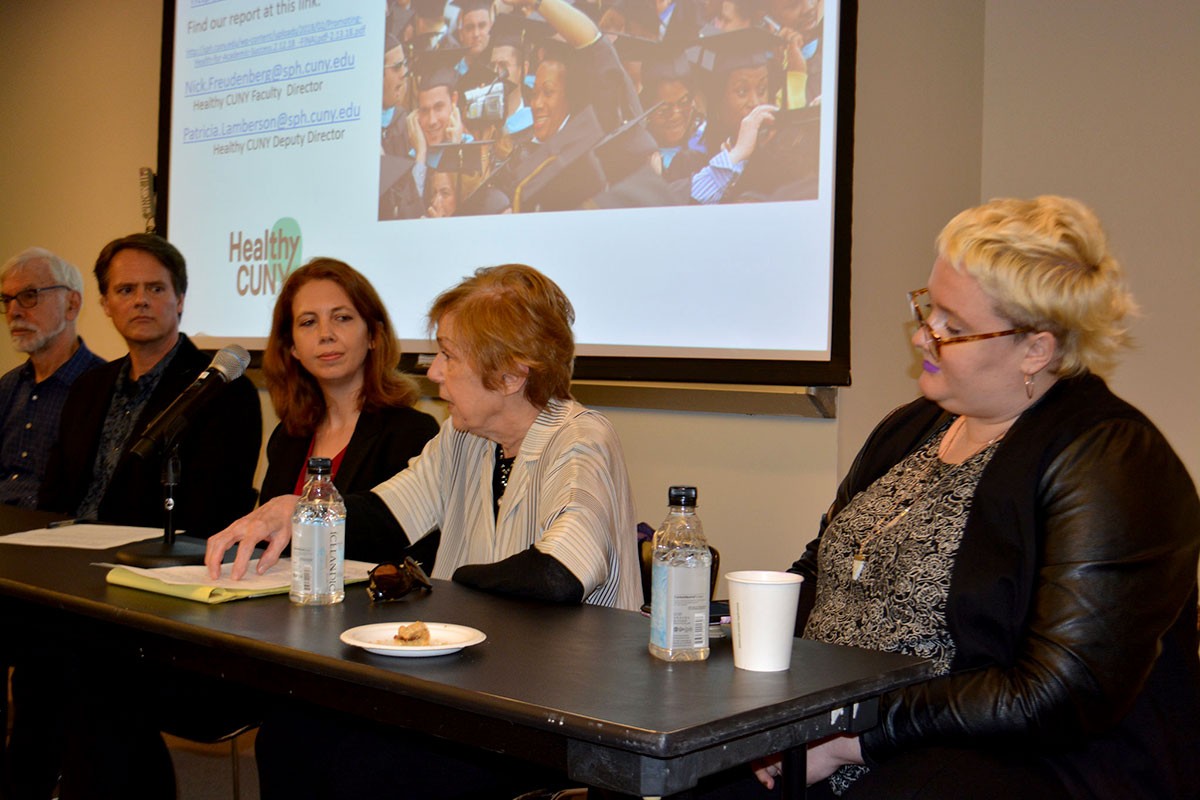 Another favorite quote of the panel from Groce, “I’ll start by saying I assume we all got here today. [Laughter]. Whether you walked, drove, used public transit or private transit, you had to move from point A to point B. You don’t get anywhere — you’re not going to get your healthcare, you’re not going to get your food stamps, you’re not going to get your food from the food pantry, you’re not going to get to the soup kitchen, you’re not going to get to the doctor for other services unless you can get from A to B. How often do we talk about the role that transportation plays in every aspect of your life? Every single aspect of your life has a part of it that will include movement from point A to point B. It is ignored.” Groce went on to talk about how the topic of transportation is never included in our general education, even at the K-12 level, and some students never learn how to use public transit on their own until they’re out of high school and have to learn the hard way. This echoes my own experience moving the New York City and getting lost at least once a week for what seemed like months. “It does make you wonder,” she pointed out, “where are the courses on how transportation affects our health, mental health included, our access to other services, and increases social disparities? It’s such a crucial part of our daily lives, but all of the decisions and practices are made by transportation agencies.” Transportation courses in higher education are in engineering and urban planning but should be in many other disciplines like education, psychology, and health, considering how transportation influences so many other parts of life. As a psychology student, I couldn’t agree more.

In the brief discussion that followed, Palmedo pointed out that there are plenty of parallels between health and transportation that are overlooked. One obvious one, highlighted by the work of a Masters student he advised, was the framing of bicycling as a transportation choice in the media as important only to congestion and the environment, and never about the health benefits of active transportation. Freudenberg talked about how some students are faced with a choice between using financial supports meant for transportation to buy food. When any adult over the age of 65 is automatically eligible for a senior discount despite their income, as he recently discovered, but college students are choosing between transportation and food, we have a real problem. For Freudenberg, the issues of access to healthcare, food, and transportation are part of the same issue—how do our policies contribute to equity? How do our policies need to change in order to make sure that people can be fully contributing members of society? 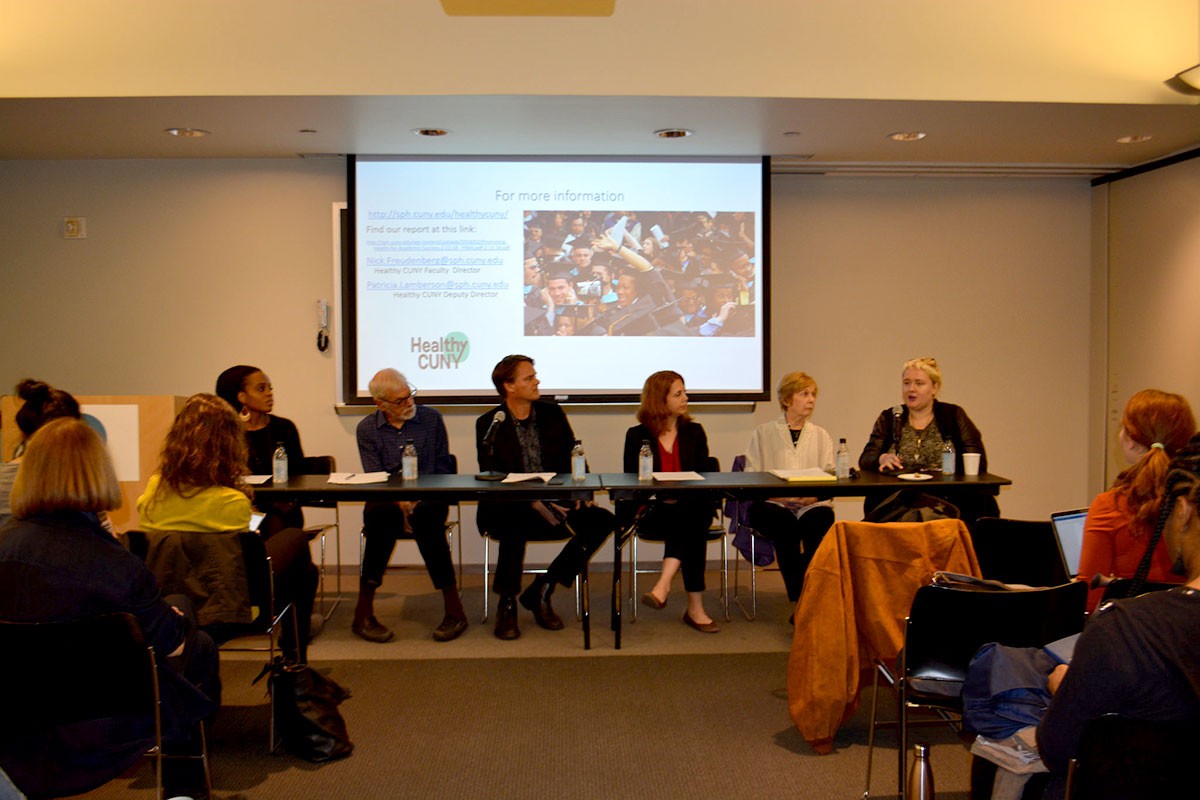 That was a great question to lead into the final speaker, Jesse Rice Evans, who is currently a Ph.D. Student in English at the Graduate Center and an adjunct lecturer at City College. As a disabled woman who has experience as a student and teacher, she responded to Groce’s comments to say that people with disabilities have to constantly think about getting from A to B. She prefaced her comments by saying that she feels that she has many privileges that other people with disabilities don’t have, including access to transportation, and that her recently developed disability has opened her eyes to the attitudes about accommodations that she has encountered as a student, or as she puts it, “total disregard for access needs from my professors, from gatekeepers at my school, from supervisors, and in my teaching roles.” This experience has influenced her teaching and the ways that she thinks about accessibility. For Rice Evans, access is about more than automatic door openers and ramps. It’s about allowing students to access the information they need in the way they need it, redefining participation, and always considering oppression. This can include allowing smartphones in class, making course and lecture materials available online, reconsidering attendance policies, encouraging learning through interaction between students, and most importantly, understanding that embodied identities such as disability, race, gender identity, and sexuality affect student outcomes through biases throughout the academy. While she always thought she’d become a “tough” teacher when she finally started teaching, her own experiences changed what she thinks about academic rigor and how that affects the learning process. If we want to seriously take on the rise of mental health disabilities in higher education, we have to start with ourselves.

There were many questions at the end of the discussion, and the audience and panel members both imagined possible solutions to these issues like on-campus health care, more affordable student lunches, a college food program to ensure students don’t go hungry, and better support from students who are going from the relatively well-supported experience of high school to college where they suddenly have to become adults and figure out everything on their own. The final question from the audience was about the compounding effects of oppression for intersecting identities and how biases and discrimination can keep students from getting the services they need, even in disability services offices. The last part of the discussion really galvanized the whole topic and gave us direction for what comes next. Freudenberg suggested that we all contribute to a “culture of caring” about all of these issues for everyone, no matter their identity or socio-economic status. This applies to students, faculty, and staff. Including diverse stakeholders at every level is the only way to ensure cultural change at CUNY and beyond. For him, if we want to transform CUNY into being more than “just another institution” that doesn’t always treat us as the complex humans we are, but reduces us to our demographic characteristics, we’ll never change our socially- and economically-stratified city. Oyo called for having student voices involved at all levels of decision-making within the university and asking people who may feel marginalized why they don’t utilize services and what barriers they face.

It’s all too easy to fool ourselves into thinking that if we make a resource available then students who need it will magically find it. We tend to ignore  social and informational barriers because we tend to see the world through our own experiences and not through the experiences of others. Freudenberg concluded by highlighting the opportunity and obligation that CUNY has to reflect the many forms of diversity present in New York City in our admission, hiring, and promotion practices. There is a plenty of work left to do.