Grandmaster Flash and the Furious Five left us a message.
Jay-Z once said that you couldn’t talk about if you ain’t live it.
Lauryn cautioned us about what happens when we are miseducated.
Meek Mill told us to learn life because there are levels to it.
Noted.

Hip-hop culture started in the early 1970s by Black and Latino youth in the Bronx. As marginalized groups that were often ignored, silenced and/or criminalized, these youths used dj-ing, rapping graffiti-ing and breakdancing as forms of expression. These are better known as the first four elements of hip hop culture. Prominent DJ and hip-hop pioneer, Afrika Bambaataa, added the fifth element, knowledge of self and community. Rapping, the most commercial and successful element has been a vehicle for the youth to vocalize what’s on their mind including, but not limited to money, drugs, sex, violence, politics, fashion, nostalgia, education, social justice issues and everyday life.

The college education we need today must prepare our students for their epic journey, the mountain and the cliff’s edge. It should give them agency, arm them to take on a difficult world to push back and not merely adapt to it.
–Cathy Davidson, New Education

For Hip-hop Pedagogy, I decided to put this University Worth Fighting For event inside of the hands of hip-hop’s creators: the youth. Initially, I was trying to figure out which speakers to invite, what would be the topics of discussion, but then I remembered a video clip of James Baldwin discussing the least recognized stakeholder in education are the children. Moreover, in my #BlackGirlMagic course, we were having a discussion and one of my colleagues asked, “We are talking about Black girls, but where are their voices?”

As the co-director of the Undergraduate Leaders Fellowship, I hit up my Leaders to see who was interested. Then I sent those who were able to participate literature from Marc Lamont Hill’s Beats Rhymes and Classroom Life about the three hip-hop pedagogies and they aligned with one of the three. When they sent me their notes, I freaked out—in a good way. I was trying to figure how were we going to discuss everything in only an hour? Lauren Melendez, the Director of the Undergraduate Leaders Fellowship, assisted me in scaffolding the hour so that their voices were centered. Kia Thomas addressed pedagogy about hip-hop and Black feminism to address learning about misogynoir and mass incarceration. Yadira Vargas highlighted bringing hip-hop into the classroom because it is already there. Steven Pacheco rapped about topics such as poverty, masculinity, identity, culture, social justice issues. I would expound on their presentations, but their forthcoming write-ups will do better justice. The common thread with their presentations was the realities of being silenced and misrepresented in and outside of the classroom. 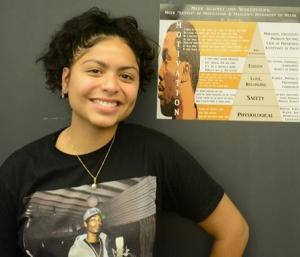 Yadira Vargas next to a Meek Mill infogrpahic

For our event, I wanted to deconstruct the traditional way we presented by doing the following:
1) Place a few hip-hop infographics on the wall since they will not be discussed at length while also  setting an ambiance.
2) Remove the tables usually used by presenters that creates division
3) Set up chairs to replicate a hip-hop cypher. Cyphers in hip-hop, are circles created by participants and onlookers who are usually rapping or breakdancing. These are not the same circles used for battle rapping.
4) The Leaders can dress how they want. Usually for such events, it’s business casual, but seeing how hip-hop is supposed to be about being authenticity and self-expression; I told them to wear what they wanted. 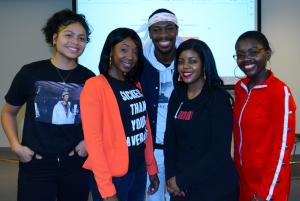 During the Q&A session, a question was asked about hip-hop in the classroom, I brought up the use of the word “nah” and the educator tried to correct them. A better example that is frequently used is the “invariant be” or the “habitual be” in AAVE, which refers to someone or something that usually does something (e.g., the computers in school be acting up). The thing about how we speak is that we have rules, we are not just throwing out words. Nevertheless, there is no value  placed on our sociolinguistic skills in schools unless it is appropriated for someones else’s liking. Therefore I will not argue about standard English and the capital that is attached to it, but if I know and demonstrate that the ability to speak both (i.e., code switch to reluctantly appease the hegemonic class for my survival), just let me great. It won’t be in the paper I hand in, but I be thinking it, B.

Many of the lessons that I learned and things that I aspire to be came with bars, metaphors and hooks, but I don’t want to be a rapper. I learned about the effects of socio-economic conditions and police brutality from Slick Rick’s parable “Children’s Story” to Nas’ chronicle in “Cops Shot the Kid”. Lectures about motivation and mass incarceration are embedded into songs with choruses sang by my favorite R&B artist. For us, hip-hop pedagogy is a lived art form. We live, we learn, we perform, we teach and then we repeat. Our lessons instruct us on how to navigate life in various spaces. I am being general because we live different lives and my life and your life are not the same therefore, some rules don’t apply. Messages from our experiential knowledge for and from the miseducated  takes learning to another level because our lens is wider and our stories are deeper. That’s word to Grandmaster Flash and the Furious Five, Jay-Z, L-Boogie and the young bol, Meek. Facts.

To revolutionize the university, we don’t just need a model. We need a movement…this movement seeks to redesign the university beyond the inherited disciplines, departments, and silos by redefining the traditional boundaries of knowledge and providing an array of intellectual forums, experiences, programs, and projects that push students to use a variety of methods to discover comprehensive and original answers.
Cathy Davidson, New Education