This past October at our first public Futures Initiative event at the Graduate Center, Curtis Wong, the Principal Researcher at Microsoft Research, gave a talk entitled “Mapping the Universe and Other Small Things.” In his talk, he mentioned a study from 1993 that asked children to a) point out Madagascar on a world map, and b) point out Yoshi’s Island in Super Mario World: 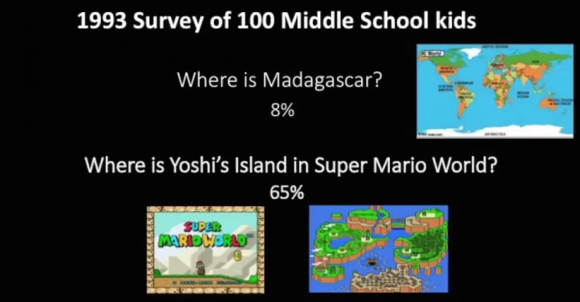 Curis Wong, slide from “Mapping the Universe and Other Small Things”

As shown in his slide, there is a huge disparity between knowing the geo-politcal boundaries of the natural world and knowing the layout of a hugely popular video game.

Since his talk, I have been thinking about mapping and video games, especially as we at the Futures Initiative are gearing up for or inaugural course, “Mapping the Futures of Higher Education.” As I search for and share many mapping resources on our Resources blog, I have been thinking about the pedagogical possibilities for the three-dimensional interaction with a map that is available via video games, and how video games can tap into that.

For my MSc thesis at the University of London, I researched educational gaming and also developed a prototype based on my findings. I found that video game players approach gaming with an intrinsic motivation — that is, it is not a requirement nor is it considered tedious to play video games, as a geography lesson could be. Minecraft provided me with an interesting example of a game that was not intended to deliver learning outcomes, but nonetheless many who played the game developed knowledge about electrical engineering, architecture, and other skills. As in Wong’s example, this learning from a consequence of playing a game can have huge implications.

The thing to understand is that humans are very, very good at learning spaces … Just to give an example, if you are left alone for five minutes in someone else’s house you’ve never visited before, and you’re feeling energetic and nosy, think about how much of that house could be fixed in your memory in that brief period. You’d be able to learn not just where all the different rooms are and how they connect with each other, but their dimensions and decoration, the arrangement of their contents, and where the windows are. Without really noticing it, you’d remember the whereabouts of hundreds of objects and all sorts of dimensions that you wouldn’t even notice yourself noticing. If you actually add up all that information, it’s like the equivalent of a short novel. But we don’t ever register that as being a memory achievement. Humans just gobble up spatial information.

There is something special about how humans remember spaces, which is why the memory palace has been such an effective mnemonic technique through the ages. Utilizing the 3-D imaging readily available within video game environments can be an effective way to harness this mental power for learning real-world spaces and engaging with ideas. Looking at some examples of mapping in video games, we can see how it is currently used in terms of popular trends, and look towards how it can be harnessed for pedagogy and for thoughtful engagement at a conceptual level.

I know that Grand Theft Auto is a very problematic video game franchise due to its depictions of violence, race, class and gender (to name a few), but I recognized Los Angeles immediately (re-casted as Los Santos) while I watched my brother play Grand Theft Auto V without knowing where it was based. The New Yorker reports that the GTA V team spent over a hundred days of field-based research in Los Angeles to recreate a Los Angeles that is familiar but doesn’t quite exist, with its area not quite right, and all its neighborhoods renamed. Grand Theft Data, unaffiliated with GTA, provides full information of real-life LA landmarks as they are mapped onto the Rockstar game, which reveals an interest among gamers in engaging with the real-life cities encountered in virtual worlds. 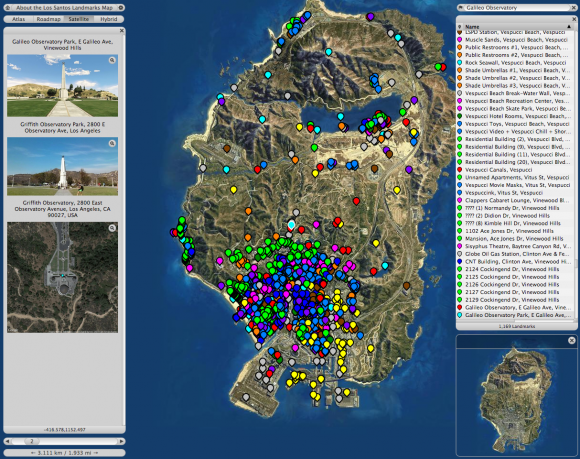 Another video game with an extensively researched map is the open world Sleeping Dogs, which offers an accurate portrayal of the city of Hong Kong, though it also centers around violent gameplay. Like GTA, the geography of Hong Kong was also modified for the gaming experience (the Sleeping Dogs Wiki details some differences between the real Hong Kong vs. the game’s version). In an additional effort to include realistic narratives and character design, the game developers also worked with real-life people they modeled their story lines after. Additionally, sound designers captured ambient noises around the city for an immersive experience (read about the making of the game’s version of Hong Kong here). This attention to detail can really capture a sense of a living space, especially as sound is bounced off the same walls from real to virtual world, and provide gamers with a close, if revised, mental map of a city they may not have visited. 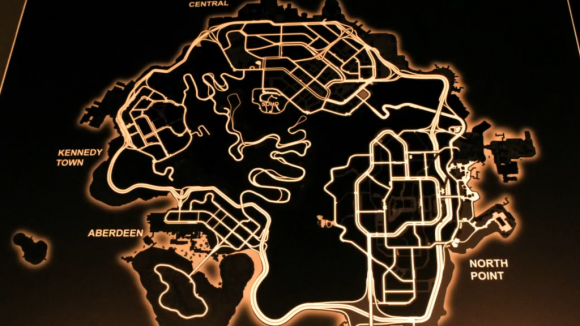 A more surreal approach to mapping a city into a virtual word is available from the game Sky Line, by Bonus Levels /Lawrence Lek. This is an open world game that is about re-envisioning London as a city of art galleries rather than financial centers, and focuses on questions of access:

Sky Line is … a response to the lack of infrastructure for independent galleries and project spaces in London, using the medium of a video game to create a unified transportation network for these disparate zones…

In this virtual world travellers are given unlimited access to the hovering trains, moving between independent galleries, domestic exhibitions, subterranean spaces, and other fragments of the city. Sky Line proposes a form of utopia where the vision of London is not of financial skyscrapers, but of infinite access. 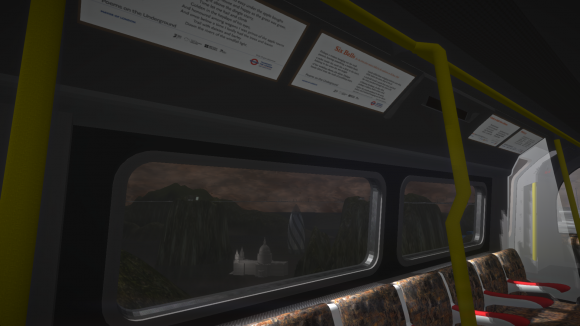 As a sometimes-Londoner, the environment is a bit disorienting, with all of the East London landmarks in close succession, and a Circle Line that moves through the city in a different manner. But still, the landmarks I look for are there, and it jogs my memory in that sense, and would provide a newcomer with a map of the city’s galleries. What is most interesting is the suggestion of embodiment that is not there. There is no avatar for the first person, there are voices and cars and footsteps that never materialize, there is poetry on the tube via the TfL and all of the art in the galleries, but no human to be found, and a city that is underwater and rendered more tropical with time moving so quickly you can watch the moon glide across the sky. As a piece of art modeled as a game, Sky Line works with maps at a conceptual level, and is challenging in the sense of how it reworks the geography of London to fit the locations of art galleries. Though quite different than the London we would meet today, the arrangement of information and levels of engagement within a three-dimensional virtual space provides the user with a way of approaching big questions (like access) through a geo-spatial medium that can instinctively organize her thoughts through a method that is something like a memory palace.

These examples of virtual maps that can be explored, based on living and breathing cities that exist in the world can give us a context to begin thinking about how to learn based on moving through space. A video game modeled exactly after Marrakech (for instance) would make for an interesting experiment — gamers who had never been there could spend time exploring the virtual city, and then we could see how well they do in the real place. With games like GTA or Sleeping Dogs, a gamer could get a sense of where he may be once he arrives in the “real” city, but with the distortions it may be hard to say.

Lek’s Sky Line project is especially relevant to the Futures Initiative as we look towards equity in education. Video games, especially those that are free or open source, can be an interesting place to explore access to education and access to learning outcomes. Additionally, developing a game can provide an intrinsic motivation for learning to code, and can dismantle some of the divide between programmers and users.

Because the spatial mapping ability of the human mind is so significant, it is important to not limit virtual world endeavors to geographical reasoning, and many more experiments of organizing arguments or ideas via virtual worlds could achieve a lot to not only instill learning but to also create and foster dialogue.