On September 7, 2017, the Futures Initiative launched our new Thursday Dialogues series with a roundtable discussion on “Pedagogies of Dissent for Asian American Studies.” Although it was a slightly more formal affair than most of our Thursday Dialogues will be, we had occasion to celebrate the start of the Fall semester by welcoming Kandice Chuh (Professor of English and American Studies at the CUNY Graduate Center) back from her yearlong sabbatical, as well as Dorothy Wang (Professor of American Studies and Faculty Affiliate in English at Williams College), to the start of her year as a Visiting Professor at the GC on an ACLS Frederick Burkhardt Fellowship. In my new role as a Postdoctoral Fellow and the Interim Associate Director of the Futures Initiative, it was my pleasure not only to organize this roundtable, but also to be in conversation with two brilliant, ground-breaking Asian Americanists.  (You can read full bios for our roundtable participants below).

The event began with a welcome address from Cathy N. Davidson (Founding Director of the Futures Initiative), who greeted our panelists and colleagues– students and faculty from all over the New York metropolitan area, including other CUNY campuses, NYU, Columbia, Fordham, Princeton, and more. 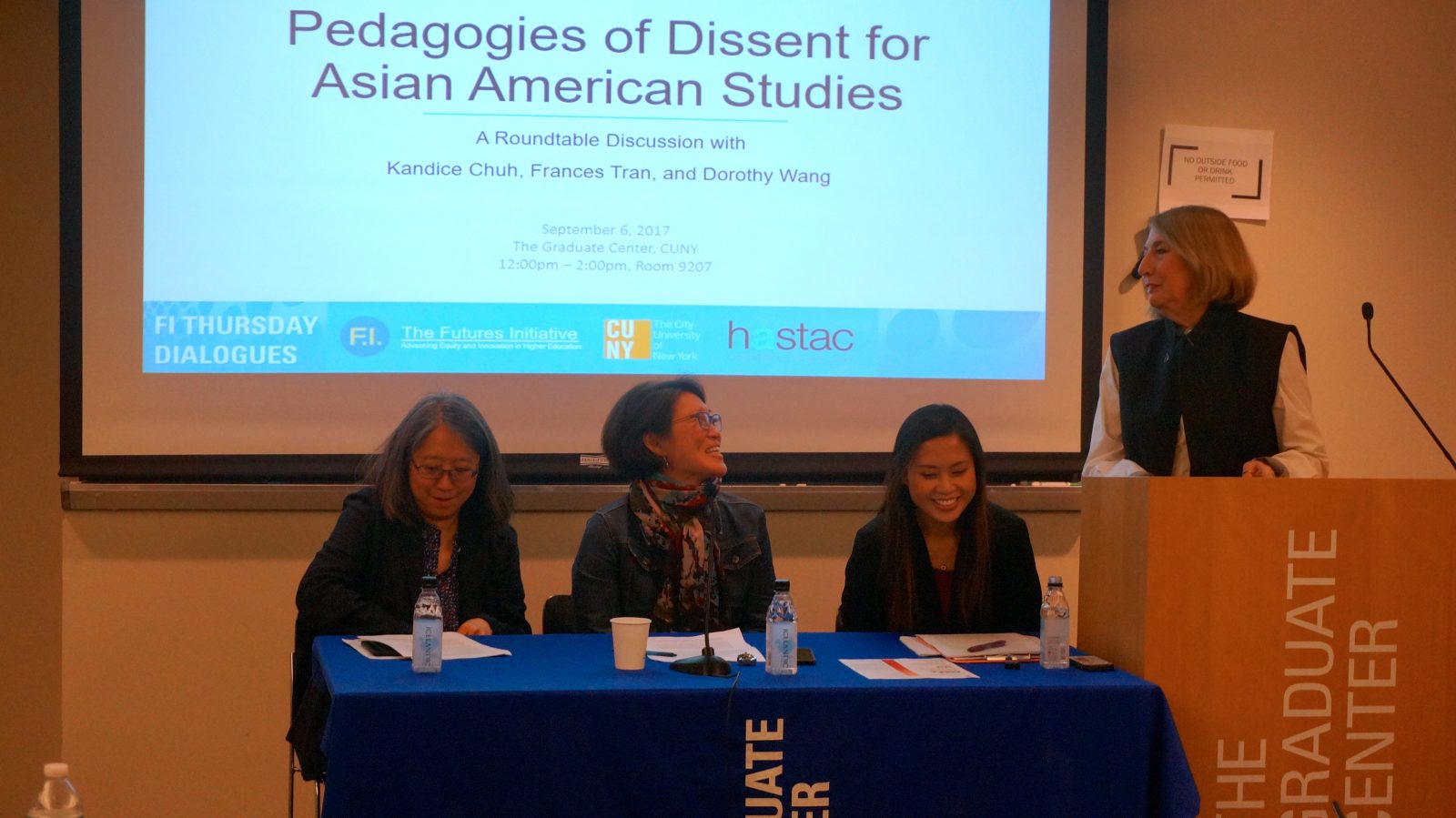 Following Davidson’s generous welcome, I provided some context for this roundtable discussion. The event was inspired by the upcoming American Studies Association Conference on “Pedagogies of Dissent” (Nov. 9-12, Chicago, IL), a theme that resonates deeply with the Futures Initiative’s commitments to student-centered pedagogy that takes inclusion, equity, diversity, and innovation as its core values. Framing this dialogue around pedagogies of dissent for Asian American Studies in particular was one way for me to connect my research and teaching to the work I’m doing now with Futures. 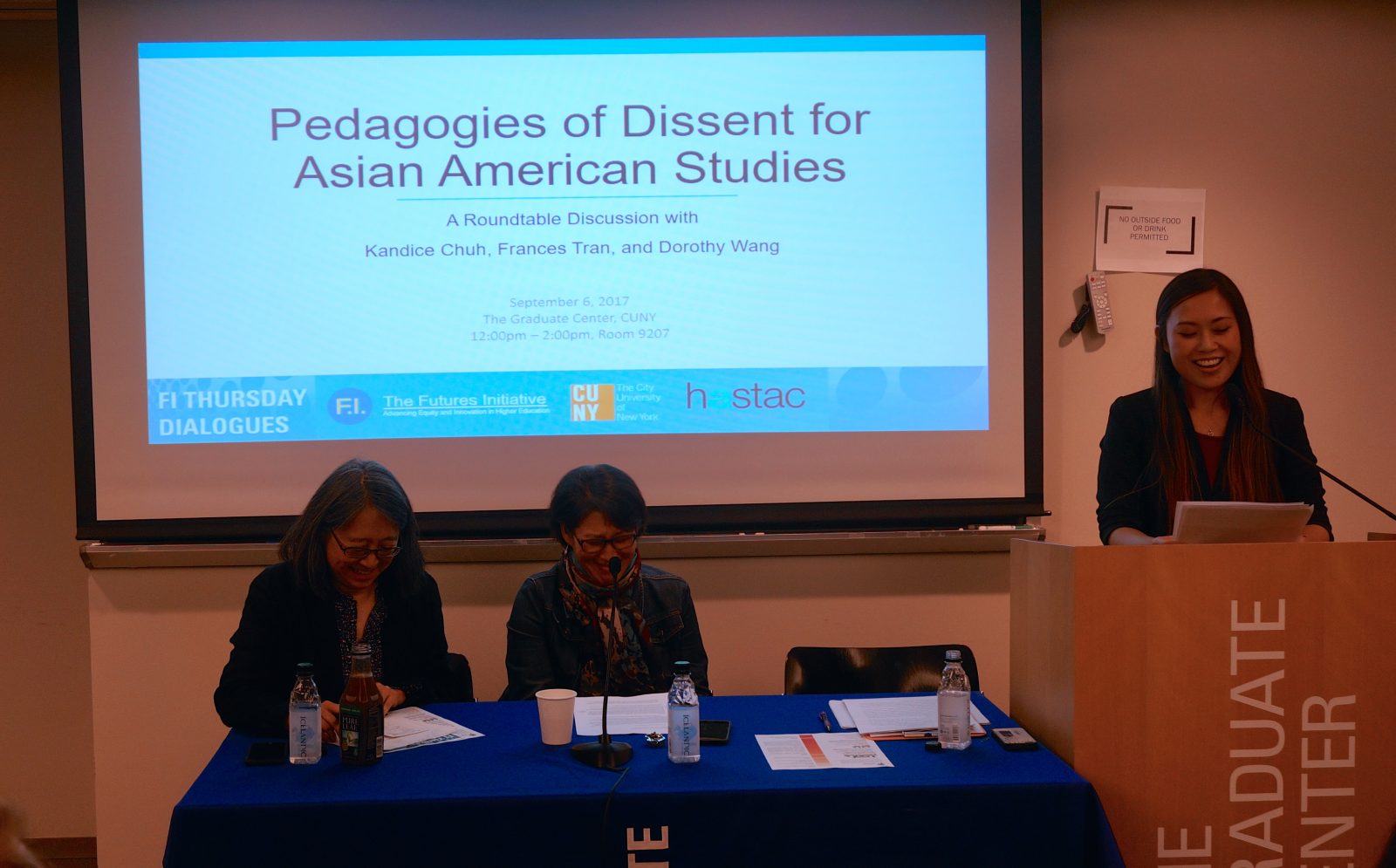 At the same time, the topic for this roundtable discussion was also developed in response to recent moves to “restructure” the Asian American Studies Program (AASP) at Hunter College and the birth of the CUNY for Ethnic Studies Initiative. Despite the enormous growth of Hunter’s AASP, which boasts an active student and faculty body and offers more Asian American Studies courses than any other university in New York City, it still lacks fundamental resources, including a tenure-track director, full-time faculty, and funds to support student research and activities–a situation that reflects the predicaments of many Asian American Studies programs nation-wide.

By opening with the ongoing struggles being waged by CRAASH (Coalition for the Revitalization of Hunter College), an Asian American student group and their allies within CUNY and other universities in the New York City area, I wanted to use this case and the organizing efforts it has spurred as points of departure for conversation. Learning how to see these struggles not as isolated instances, but as varying forms of structural injustice that extend far beyond the scope of a single institution, allows us to reflect on the state of Asian American and Ethnic Studies within higher education. It also creates space for a broader conversation about the persistent regulation and disciplining of minoritized subjects and knowledges, and how thinking through pedagogy as a mode of dissent suggests ways of challenging the violences of institutional racism and racialization. 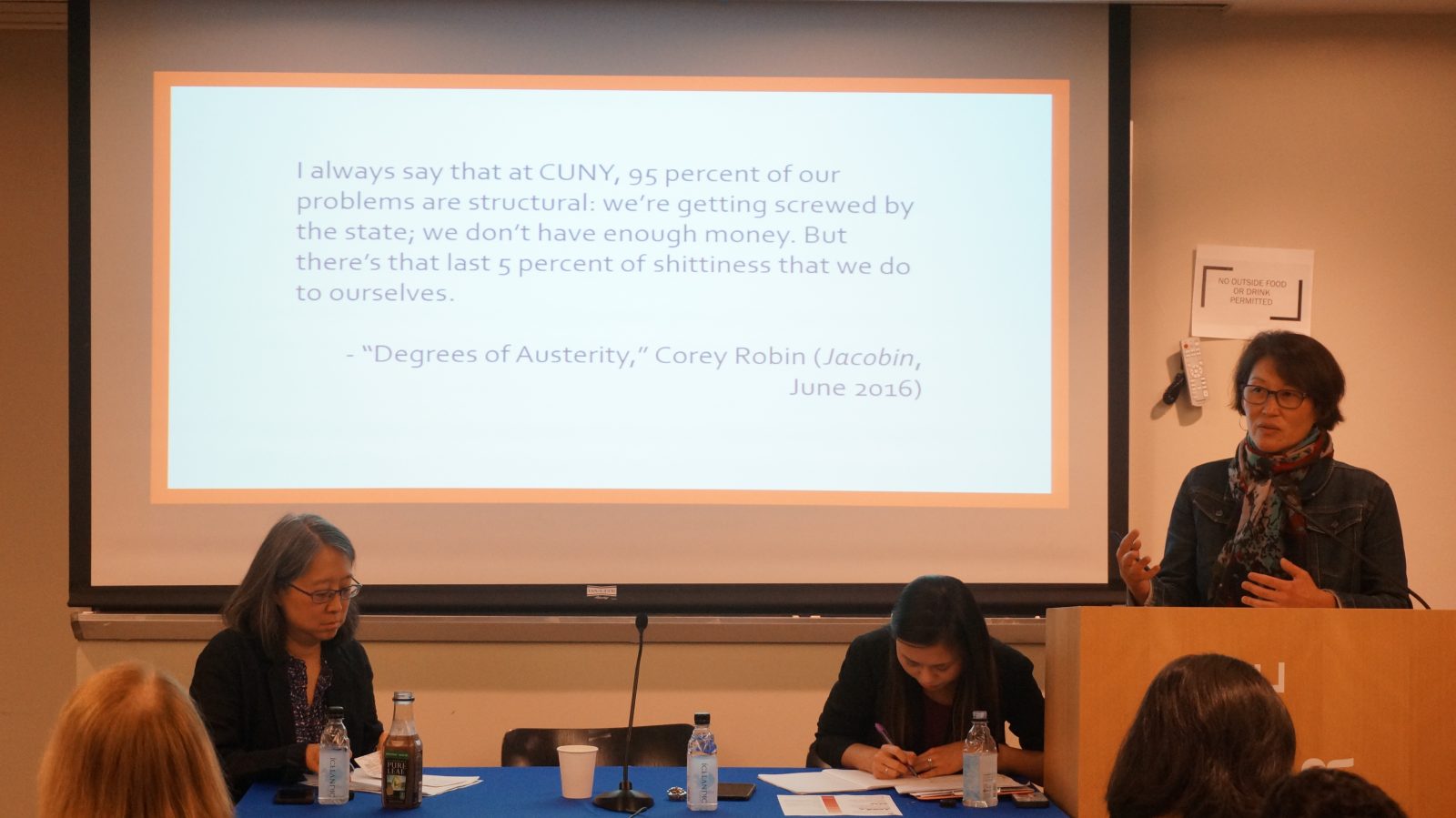 Our first speaker, Kandice Chuh (Professor of English and American Studies, The Graduate Center, CUNY; President, American Studies Association), began her talk by raising two important questions: Against what are we dissenting? And, how can the field of Asian American Studies itself function as a pedagogy of dissent?

Framing her remarks around three illuminating quotes by Corey Robin (“Degrees of Austerity,” Jacobin June 2016), Moon-kie Jung (Beneath the Surface of White Supremacy 2015), and Vijay Prashad (The Karma of Brown Folk 2001), Chuh invited us to contemplate how their words influence our understanding of the work we do as scholars, teachers, and activists.

One observation Chuh made in particular entails the unsettling contradiction fields like Asian American Studies have to grapple with today, namely, the presence of Asian Americans who figure as prototypical neoliberal subjects, satisfied with the status quo, and drawn to capital rather than the critique of capitalism. She prompts us to consider how we can address such subjects whose political agendas diverge so sharply from the social movements on which Asian American Studies was founded. By refusing the sharp binary that divides people into “problems” and “solutions,” proper and improper subjects, Chuh suggests we can work toward a more nuanced understanding of the messy entanglements that underlie systemic forms of injustice.

Her talk was an enjoinder to actively de-authorize the language of white supremacy, which covers over the foundational violences–indigenous genocide, colonialism, slavery, and so on–that have been constitutive to the United States. Recognizing these historical entanglements, she claims, is also to perceive how they persist in the present through the decline of educational democracy, the dispossession of underrepresented communities, and the elimination of programs like DACA. 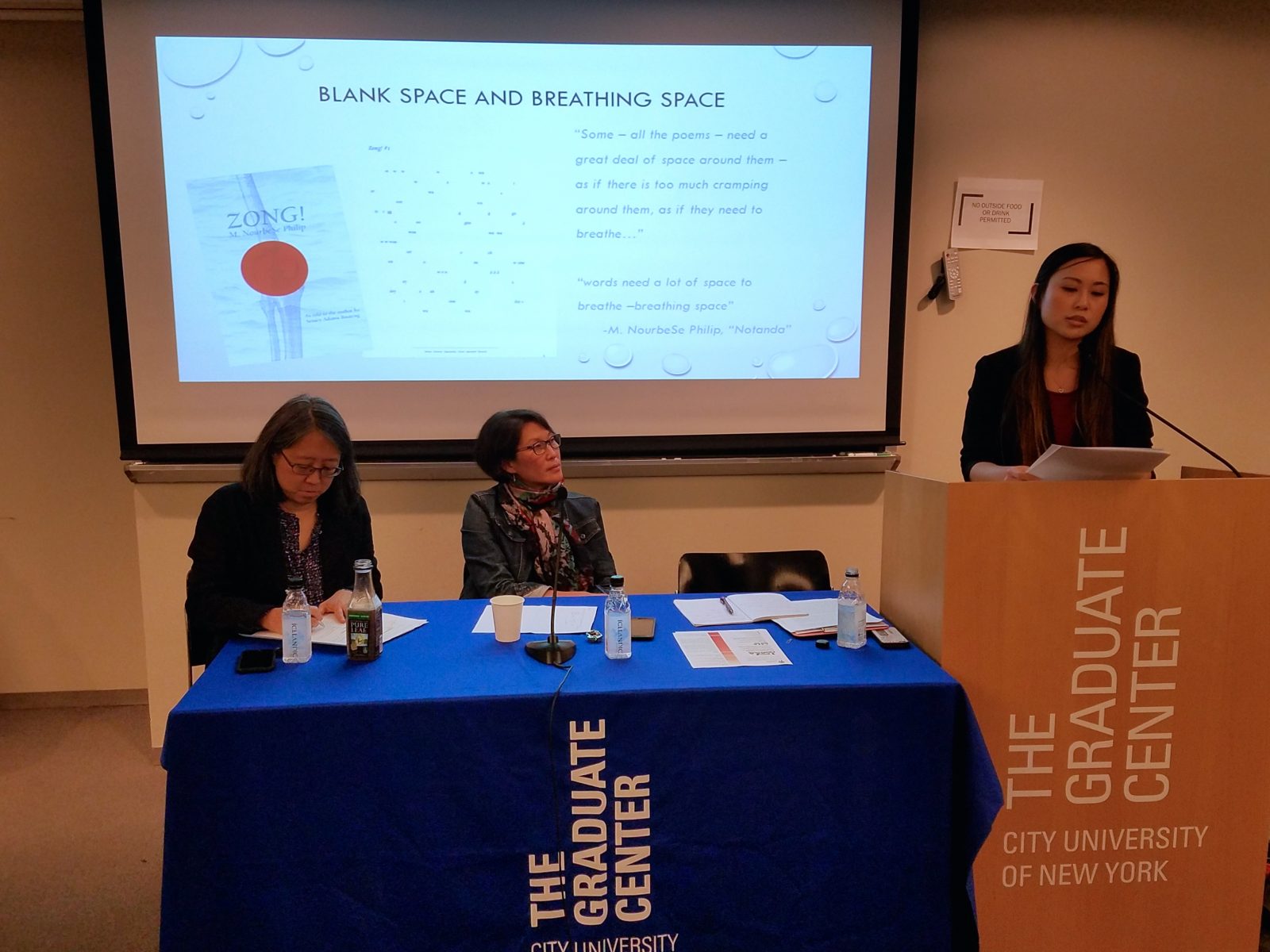 Following Chuh, I (Frances Tran, Postdoctoral Fellow and Interim Associate Director of the Futures Initiative) shared my remarks, “‘Arts of Noticing’: On Creating Breathing Room for Dissent,” which drew largely from the insights I have gained through my teaching. I began by underscoring how pedagogy involves more than the techniques you use in the classroom, that it starts in the messy brainstorming and design stages before you step into that physical space and encounter your students for the first time. I wanted to illustrate, in short, the importance of the approach, the thinking that goes into shaping a class that first makes your pedagogy perceptible, including details such as course titles, text selection, and syllabus design.

I spoke about the subtle shift that occurs when you rename an “Introduction to Asian American Literature” course into something like, “What is Asian American Literature?,” which unsettles the idea of predetermined categories and instead invites deeper contemplation of the the scope and scale, objects and objectives of Asian American literatures. I also discussed how works such as Karen Tei Yamashita’s I Hotel (2010), Gene Luen Yang and Sonny Liew’s The Shadow Hero (2014), Cristina García’s Monkey Hunting (2004), and Manjula Padmanabhan’s Harvest (2003), offer different beginnings for a course like this.

Yet, among the insights I hoped people would take away from my talk is the importance of leaving blank spaces in your course schedules to create “breathing room” in your classes, an idea inspired by M. NourbeSe Philip’s reflections on the the process of creating her evocative poetry collection Zong! (2011). This breathing room is necessary because it allows conversations to spill over into other class sessions; it gives students a chance to share readings they encounter in other courses or in their daily lives; it leaves time for both reflection and dissent. 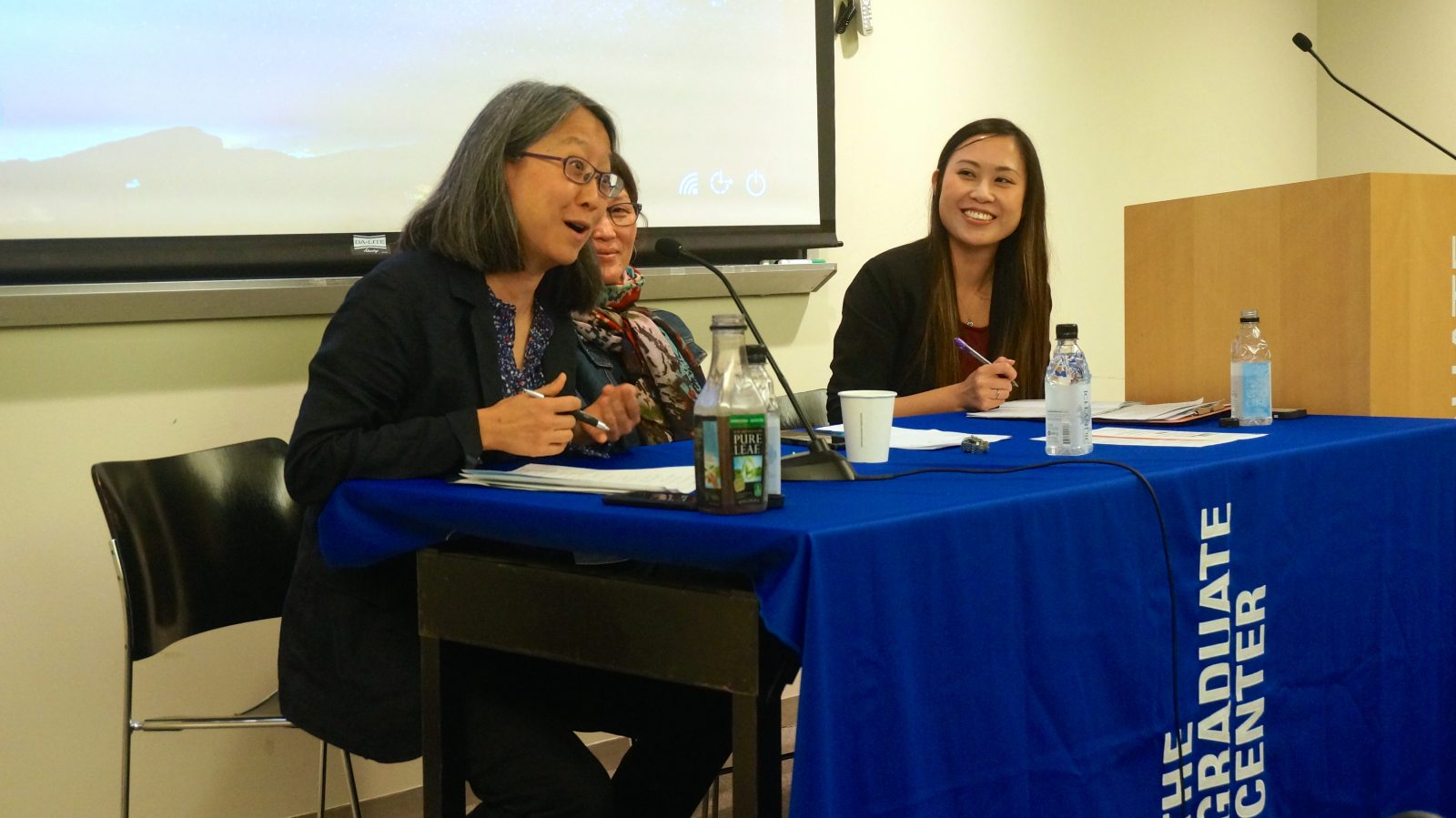 Our last speaker, Dorothy Wang (Professor of American Studies and Faculty Affiliate in English at Williams College) shared her experiences navigating different institutional spaces and her efforts, alongside colleagues and students, to advocate for Asian American Studies programs. Her talk pressed us to contemplate the idea of “pedagogies of dissent” outside of the classroom as well as its material costs and challenges.

Wang’s reflections reminded us of the constraints of the neoliberal university and ever-increasing demands for professionalization and tenure that are most sharply felt by young faculty from underrepresented communities. Among the questions she asked include: How do we support promising students who feel excluded from the culture of their universities? How do we help them negotiate the inhospitable space of the academy while also creating room for them to accomplish their goals?

Drawing on her own training in English and her current position in American Studies, Wang also reminds us of the many unfinished projects that we need to engage in to enact both curricular and institutional change. One project that she hopes might be undertaken in the future would entail a fundamental re-visioning of the major aesthetic and literary categories that underlie English as a discipline. Critiquing the purported universality of the speaker in poetry and attending to the gendered and racial dimensions of tone and metaphor are just some examples Wang raised about how we might unsettle the way students understand and approach the study of literature. 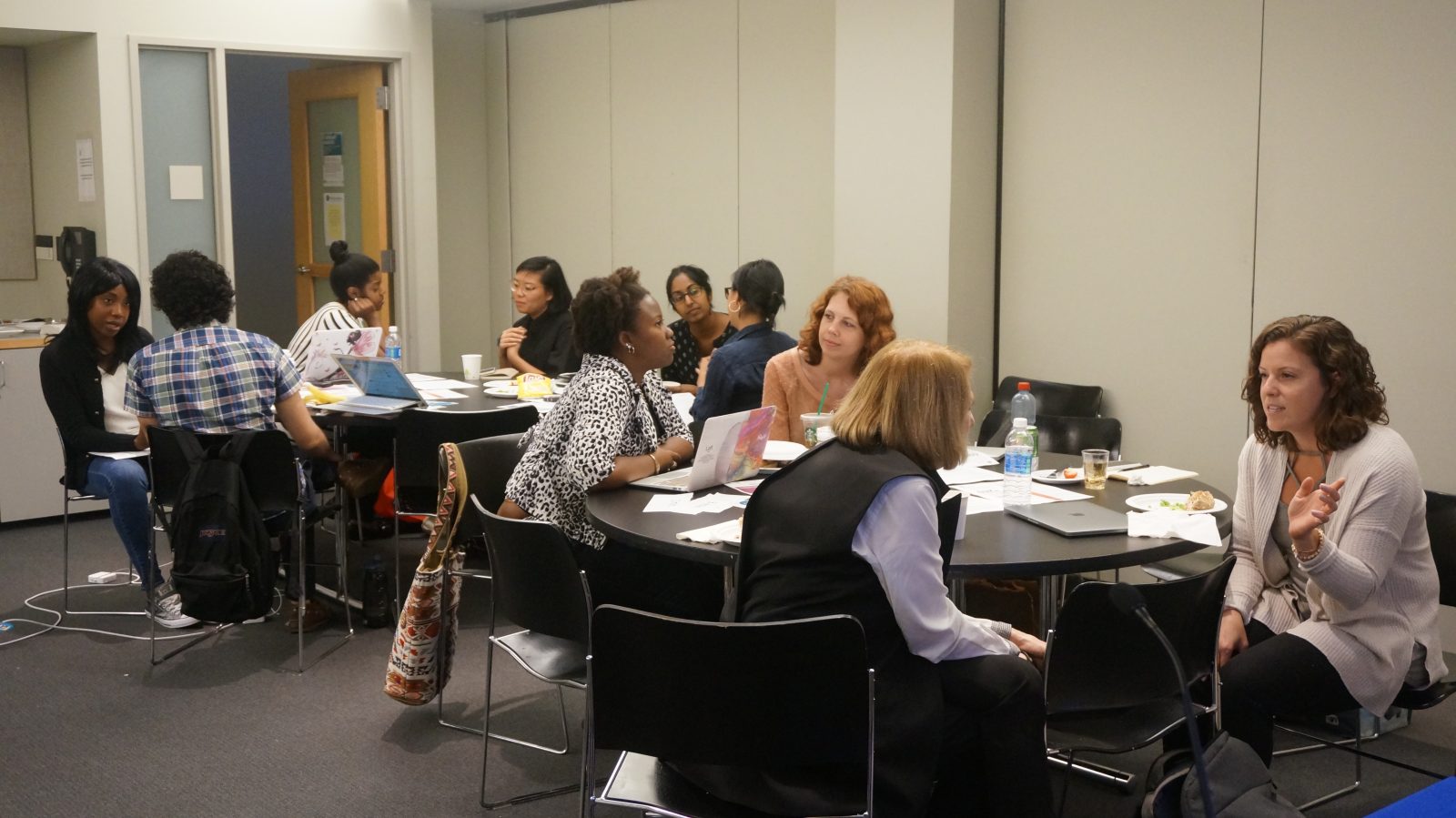 Following these three talks, and in the spirit of thinking through “pedagogies of dissent,” I invited everyone to engage in a listening dyad activity, which I learned from Professor Roger Sedarat when I was an undergraduate student at Queens College. The purpose of a listening dyad is to encourage active listening and to give everyone a chance for their voices to be heard.

For this exercise, we all broke up into pairs and in each pair, people took turns acting as the speaker and listener, while responding to these two prompts: 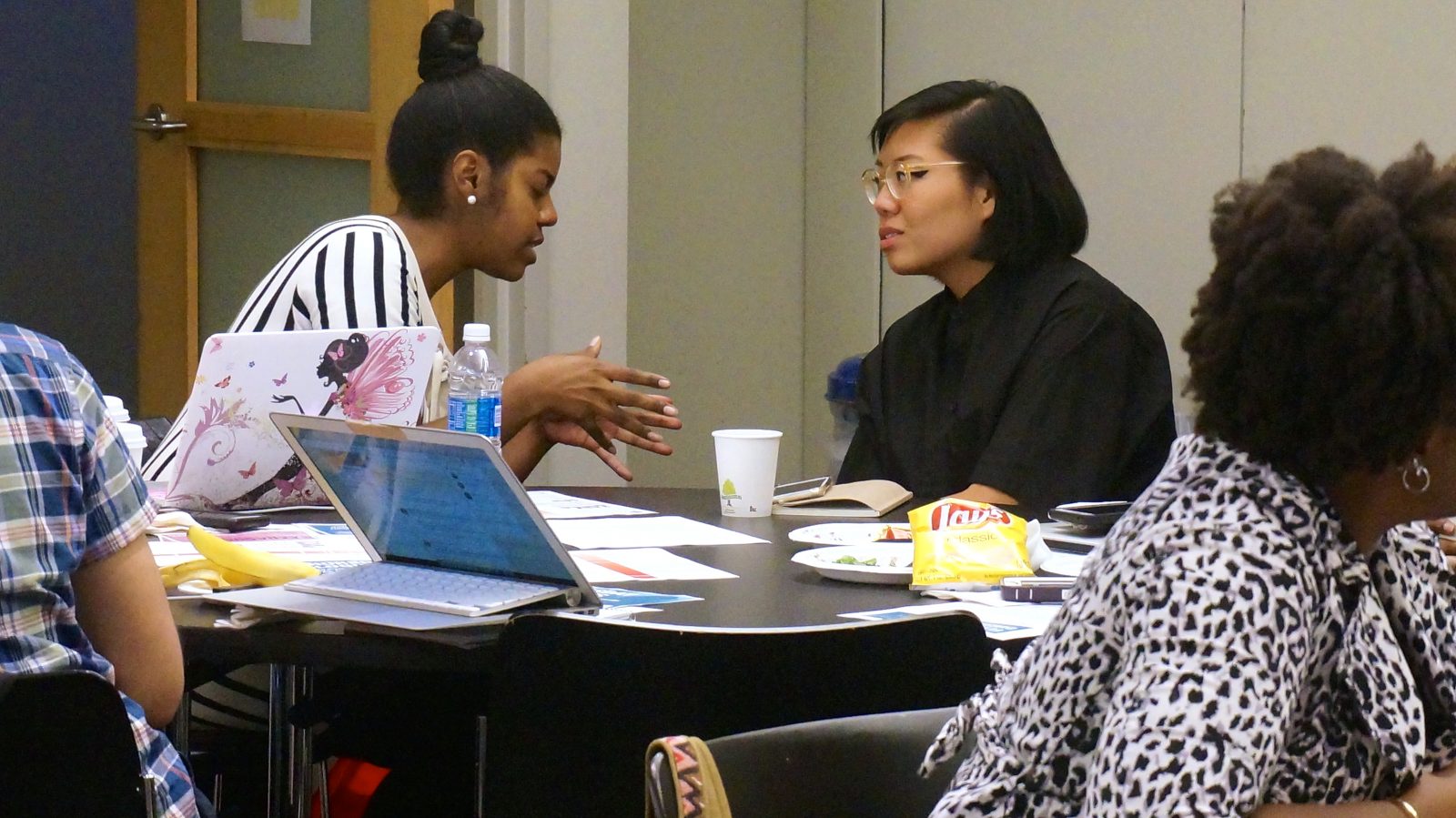 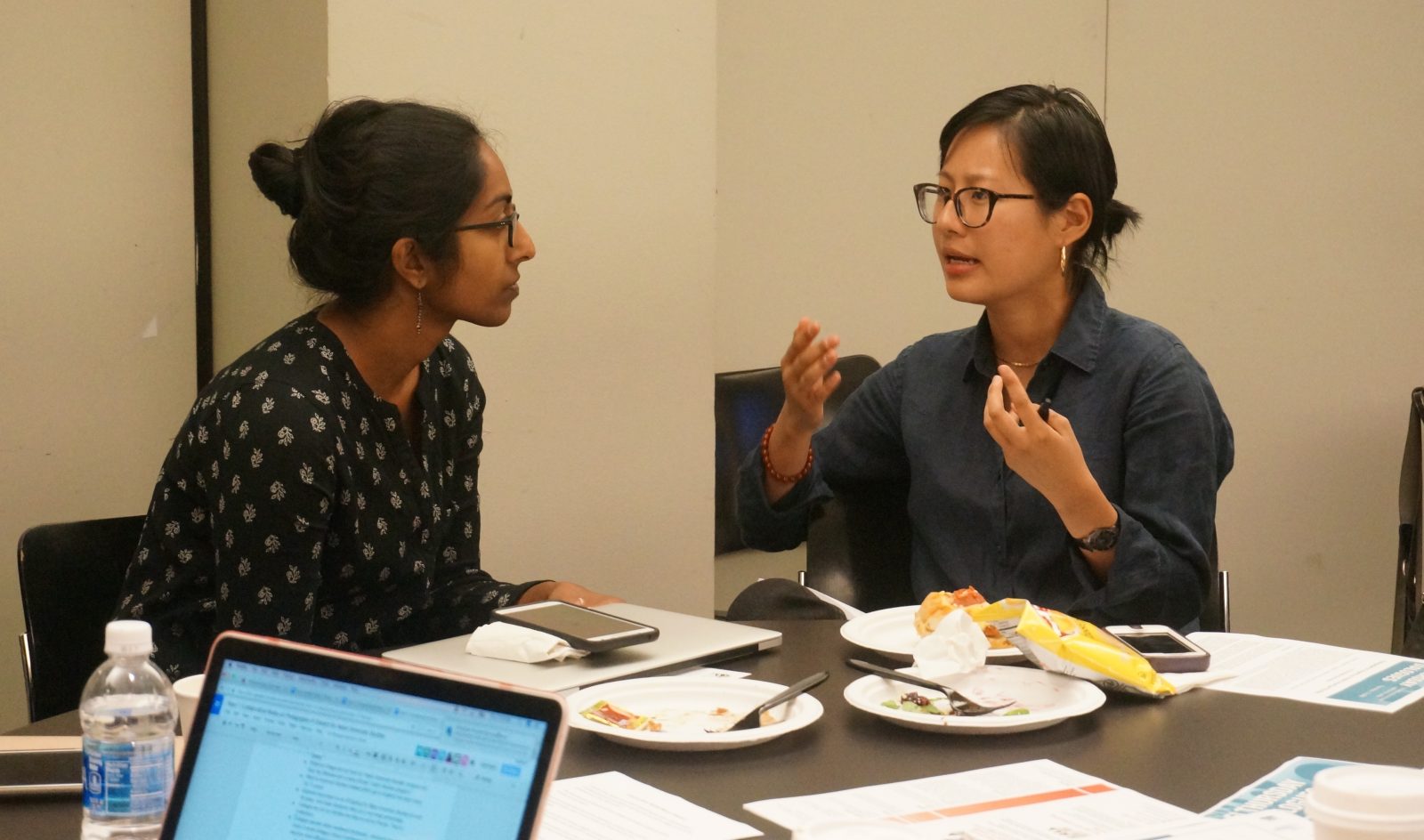 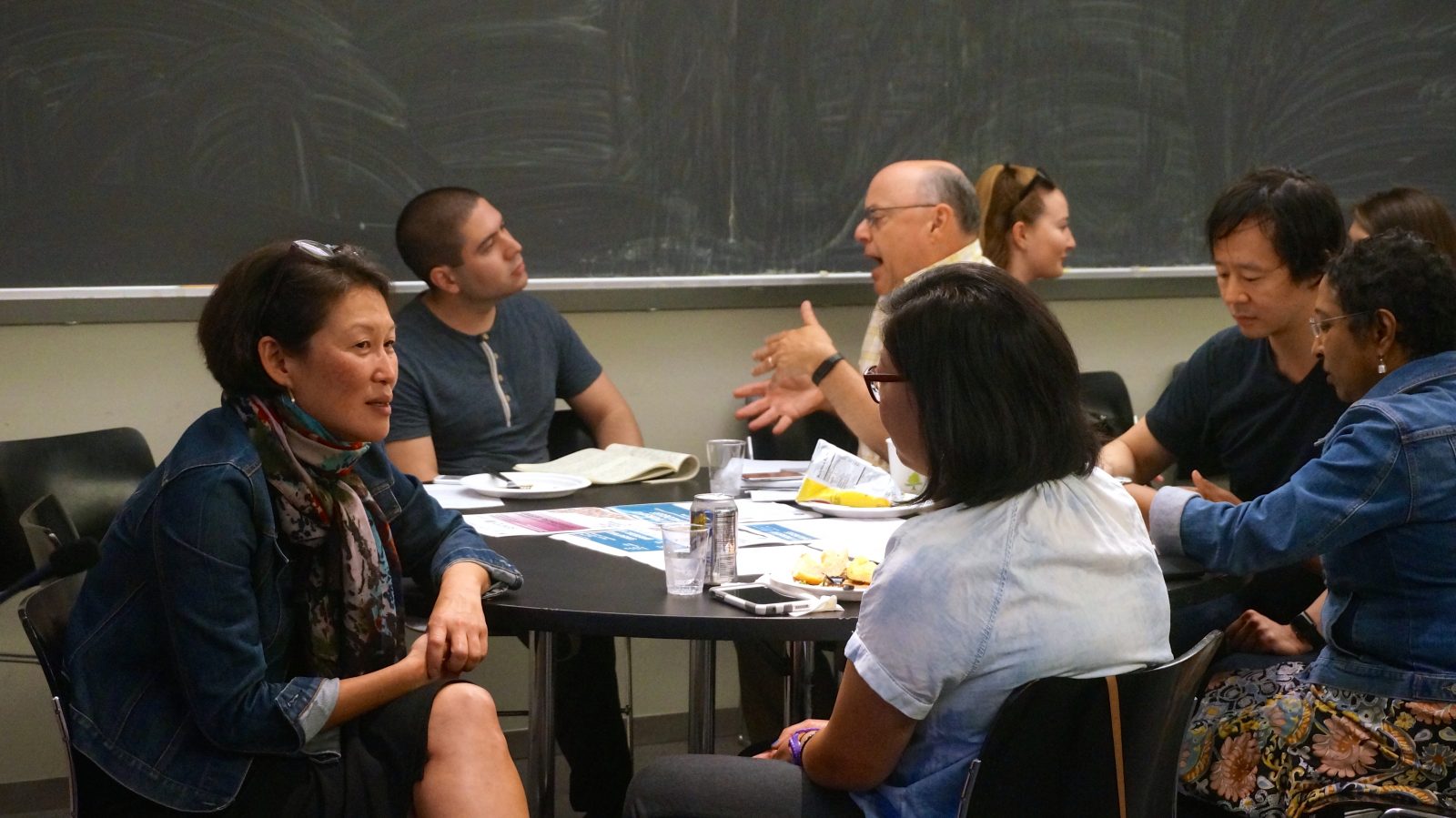 By giving time for people to get to know each other and share their thoughts in intimate conversations first, this helped set the stage for the group discussion to follow. 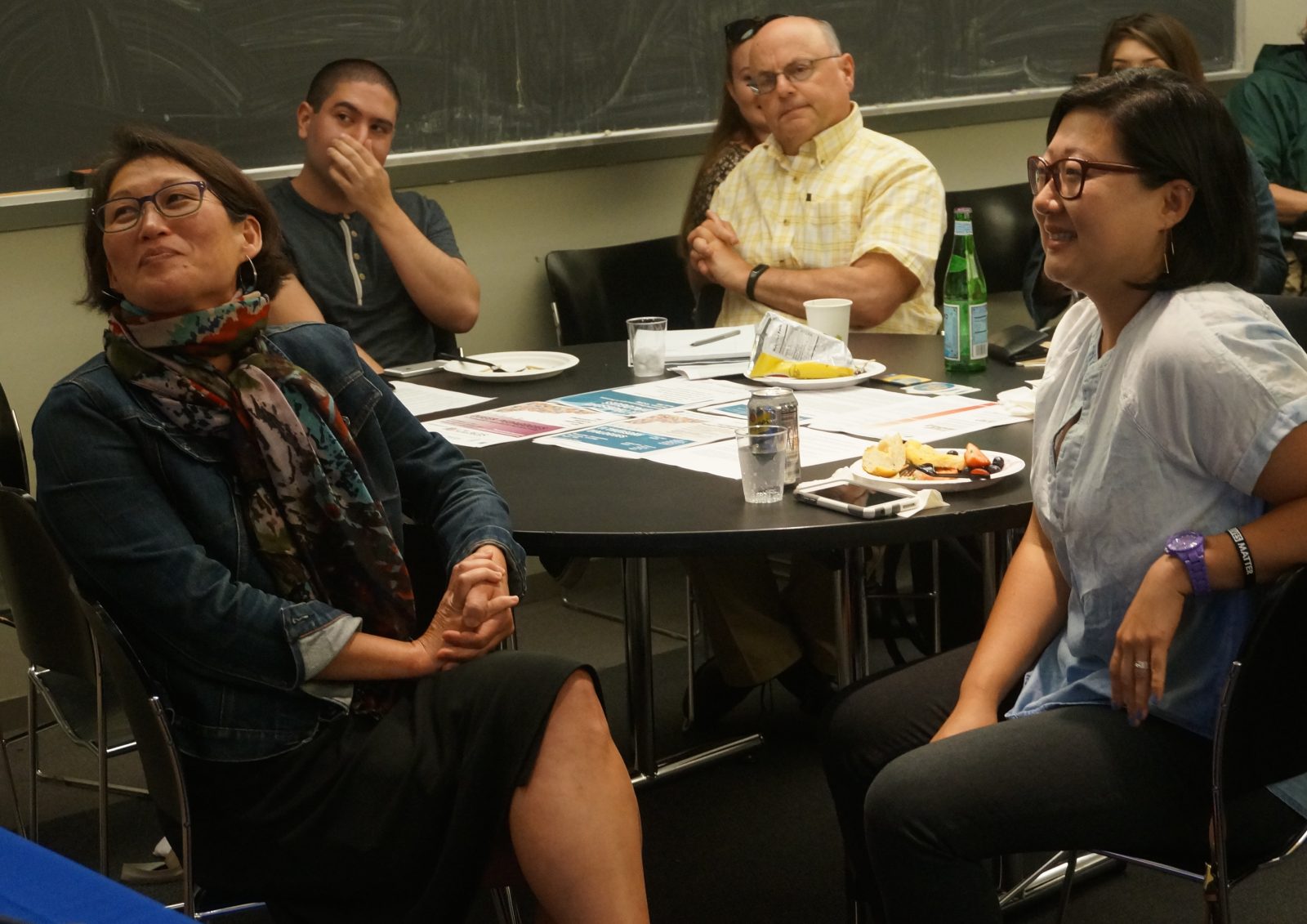 People felt comfortable sharing their own struggles grappling with institutional politics and varying forms of institutionalized racism. We revisited the organizing activities of CRAASH and the CUNY for Ethnic Studies Initiative to discuss how the burden of fighting for programs like Asian American Studies often falls on the shoulders of students. We noted while these efforts often represent a vital component of students’ experiences, they also take time, energy, and commitment outside of coursework and other responsibilities that only underscores structural injustices within the academy, especially if these actions do not ultimately lead to institutional change. 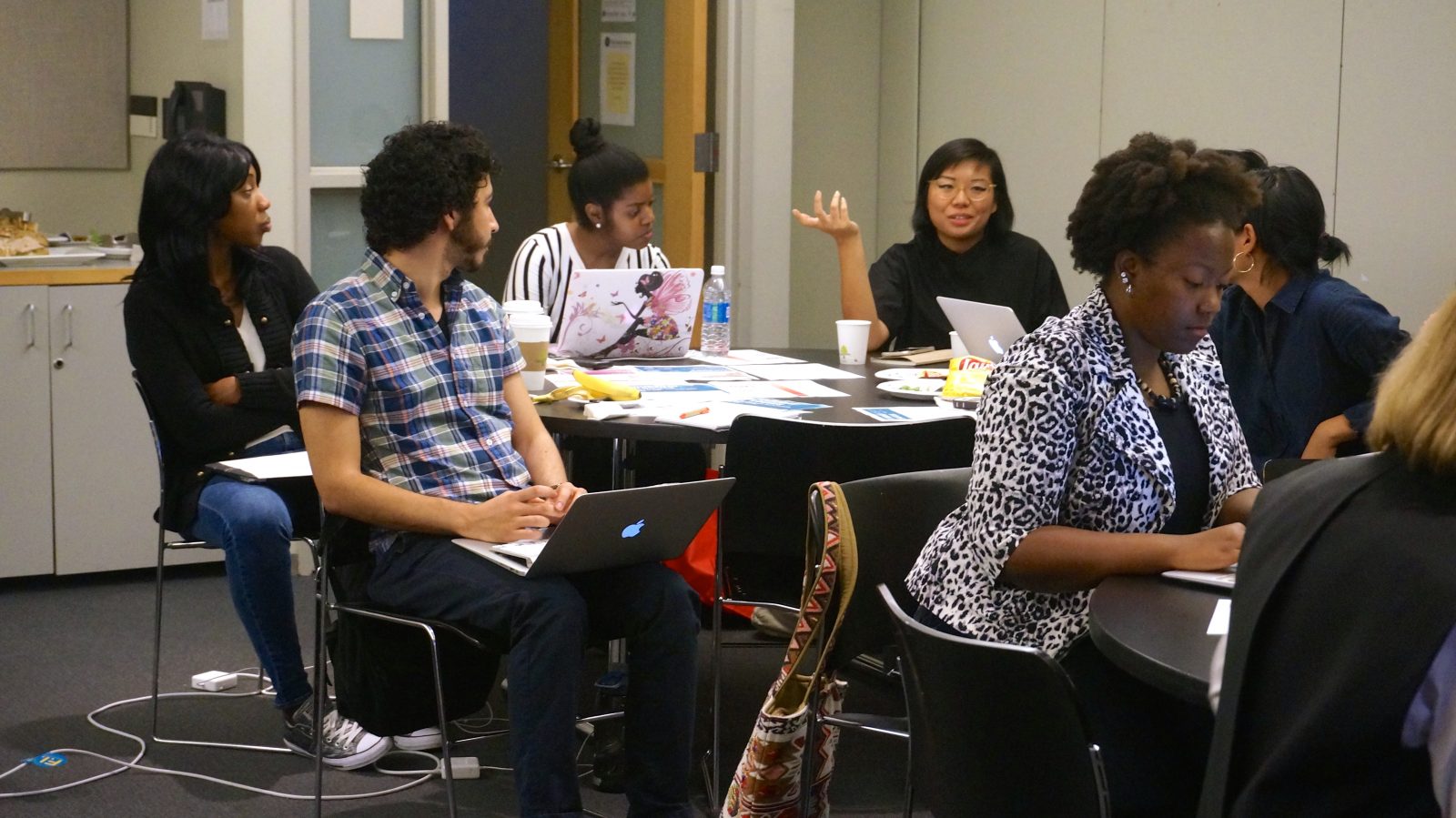 There were several illuminating observations in response to these questions: Rather than viewing their experiences as failures, students can appreciate the enormous insights they gain into how universities operate, which can inform their thinking and scholarship. Additionally, instead of trying to address an administration that is unwilling to listen, perhaps it is necessary to devise other ways of doing the work they want to do rather than viewing the institutionalization of Asian American Studies programs as the horizon. We also discussed how in mentoring students, faculty should seek, not to determine their agenda, but rather to offer support by outlining possible courses of action and consequences, and striving to create the conditions of possibility for them to achieve their visions. 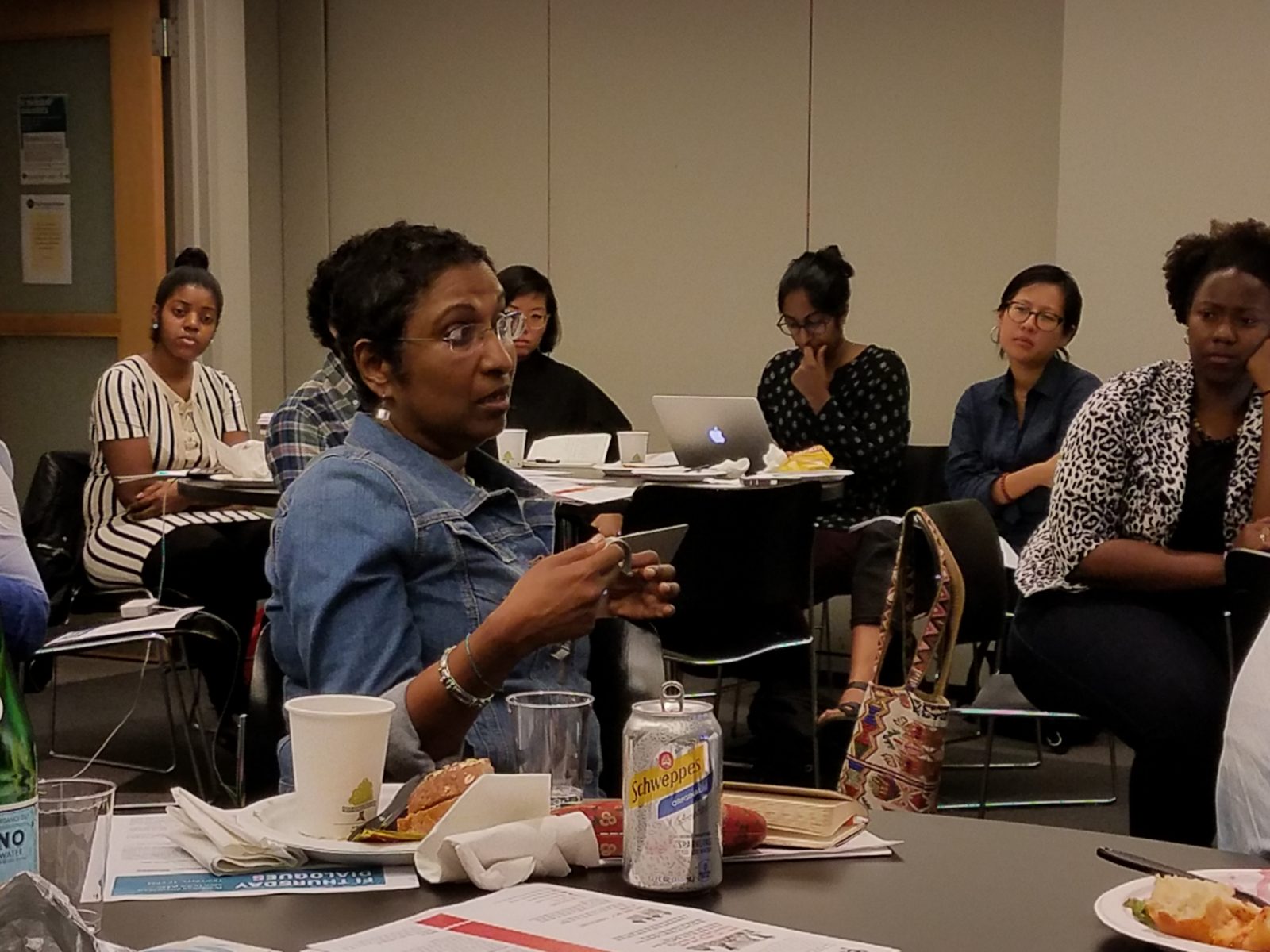 Many other questions were raised as well, including: How do we work for institutions that we don’t believe in? What are the ethics of pedagogies of dissent? Given the material and personal costs of dissent (i.e., burning out, expulsion, not getting a job), how do we guide students through this process? How do we push Asian American Studies as an epistemological and intellectual project, given the obstacles to and challenges of institutionalization?

Although we did not have time to fully address these difficuclt questions, I am happy that this event created space for enumerating these concerns, and my hope is to that they will be taken up in other spaces, shapes, and forms, in the year ahead.

Read the tweets for this event under the hashtag #fight4edu here.

Frances Tran is a Postdoctoral Fellow and the Interim Associate Director of the Futures Initiative at the CUNY Graduate Center. Her research focuses on Asian American and multiethnic cultural studies, with an emphasis on feminist and queer of color critique. She is currently working on a book manuscript, tentatively titled, “Aleatory Entanglements: On Minoritized Knowledges, Speculative Aesthetics, and Other Humanities.”

Dorothy Wang is an Associate Professor in the American Studies Program and a Faculty Affiliate in the English Department at Williams College. Her book Thinking Its Presence: Form, Race, and Subjectivity in Contemporary Asian American Poetry (Stanford University Press, 2013) won the Association for Asian American Studies’ 2016 award for best book of literary criticism. It also made The New Yorker‘s “Books We Loved in 2016” list and has inspired a conference on race and creative writing that has run annually since 2014. During academic year 2017-2018, she will be in residence at the CUNY Graduate Center on an ACLS Frederick Burkhardt Fellowship, working with Ammiel Alcalay.